HomeTechnologyRivian says it's still on track to build 25,000 EVs in 2022
Technology 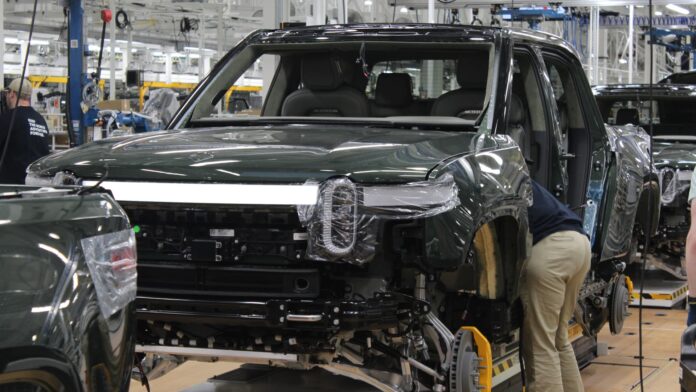 Production of electric Rivian R1T pickup trucks on April 11, 2022 at the company’s plant in Normal, Ill.

Electric-vehicle startup Rivian Automotive said it produced more than 4,000 vehicles in the second quarter and that it remains on track to build 25,000 vehicles in 2022.

Rivian said in a statement that it produced 4,401 of its electric R1T pickups and R1S SUVs in the quarter and that 4,467 vehicles were delivered to customers in the period. The company didn’t break out production or deliveries by model.

The company said last year in its IPO roadshow that it expected to build 50,000 vehicles in 2022. But it cut that guidance by half in March, saying that ongoing global supply-chain issues had “added a layer of complexity” to its efforts to ramp up production. The company said Wednesday it still expects to make 25,000 vehicles this year.

Although still small, the market for electric pickups is expected to grow rapidly over the next few years. Ford Motor said Tuesday that it sold 1,837 of its electric F-150 Lightnings in June and that it has sold 2,296 in total since beginning production in late May.

From the beginning of production in late 2021 through the end of June, Rivian produced a total of 7,969 vehicles.

Meta is downsizing at New York location it opened in 2019