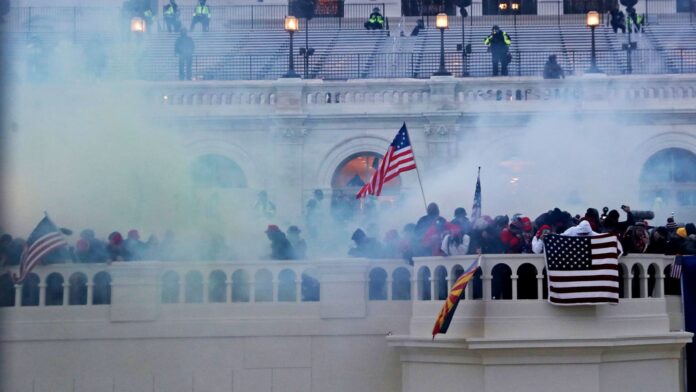 A mob of supporters of U.S. President Donald Trump are tear gassed as they storm the U.S. Capitol Building in Washington, January 6, 2021.

The Secret Service erased text messages from both Jan. 6 and the day before the attack on the Capitol after the Department of Homeland Security’s internal watchdog requested records of electronic communications tied to the insurrection, according to a letter sent to congressional committees that was obtained by NBC News.

The details regarding the deleted messages were revealed in a letter sent to two congressional committees Wednesday by Homeland Security Inspector General Joseph Cuffari, who said he was informed that many of the messages from Jan. 5 and Jan. 6 had been erased “as part of a device-replacement program.”

The Intercept first reported the content of the letters.

A spokesperson for the House Homeland Security committee confirmed the letter, which was also given to the Jan. 6 committee, a source familiar with the matter confirmed to NBC News.

“The USSS erased those text messages after OIG requested records of electronic communications from the USSS, as part of our evaluation of events at the Capitol on January 6,” Cuffari said in his letter.

He added that DHS personnel had repeatedly told inspectors that “they were not permitted to provide records directly” to the watchdog and that the records first needed to be reviewed by the agency’s attorneys.

“This review led to weeks-long delays in OIG obtaining records and created confusion over whether all records had been produced,” he said.

NBC News has reached out to the Secret Service, DHS and its inspector general for comment.

The Secret Service is part of the Department of Homeland Security.

The deleted text messages are likely to put a new focus on the Secret Service’s actions surrounding the Jan. 6 riot.

Hutchinson said Secret Service official Tony Ornato had described in conversations with her a livid Trump grabbing for the steering wheel from the back seat, wrestling with one of the bodyguards for control of the car and ultimately grabbing the bodyguard’s throat when he learned he was being driven back to the White House instead of the Capitol to join his supporters after his speech at the Ellipse.