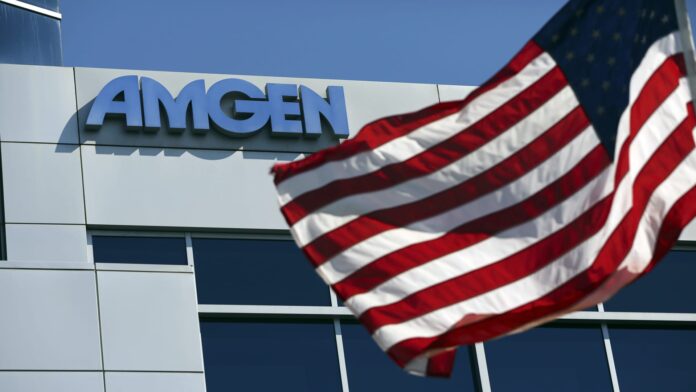 Investors should sell biopharma stock Amgen ahead of its obesity drug update next week, according to Barclays. Analyst Carter Gould downgraded Amgen to underweight from equal weight, saying there are high expectations around its obesity drug AMG133 after the stock’s rally this month. The stock is up 21.5% in October. Amgen holds an analyst call on Nov. 7 from the American Heart Association, which meets in Chicago Nov. 507, as well as an earnings call on Nov. 3. “AMGN shares have added $25bn+ in MCap since Oct. 1, primarily on the back of optimism surrounding early-stage obesity asset, AMG133, and a sector-wide melt-up,” Gould wrote in a note Monday. “In our view, this sets up the AMG133 data update on the AHA analyst call (Nov. 7) as a potentially higher impact catalyst, where the drug faces high hurdles on efficacy and tolerability (with limited data shared to date) and Amgen faces questions on speed of development path and ability to compete with entrenched competition (LLY, NVO),” Gould added. Amgen shares outperformed nearly all its peers this month, even companies that have reported strong third-quarter results, after announcing at the start of October that it will disclose more obesity drug data, according to Barclays. Shares of Merck & Co. are up 17% this month, while Eli Lilly and AbbVie have advanced roughly 11.3% and 10%, respectively, over the same time period. In spite of Amgen’s outperformance, Gould said investors have seen “sparse initial data” on AMG133 so far. “This represents a challenging setup for Amgen to navigate, particularly with any launch for ‘133 likely weighted to 2027-2028. In short, we think AMGN shares could come under pressure after the recent gains on the back of this update,” the analyst wrote. The analyst’s $234 price target represents 14.5% downside from where Amgen shares closed Friday at $273.81. The stock is down 2.4% premarket Monday. —CNBC’s Michael Bloom contributed to this report.