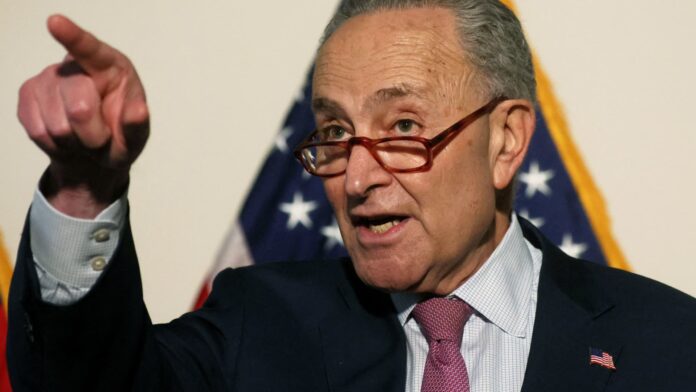 The U.S. Senate could begin work on a pared-down China competitiveness bill as soon as next week, with the goal of passing it through Congress before lawmakers depart Washington in August, NBC News reported Thursday.

Senate Majority Leader Chuck Schumer, D-N.Y., has told senators that a floor vote could come as early as Tuesday to kick off the legislation-writing process on a bill that includes billions in funding for semiconductor manufacturing, a source told NBC.

It would also include an investment tax credit from another bipartisan chip-manufacturing bill, and additional components could be added as the process plays out, according to NBC.

The plans come after Senate Minority Leader Mitch McConnell, R-Ky., threatened to block a much broader bill to boost competitiveness with China, called the United States Innovation and Competition Act, or USICA.

The House and Senate have passed different versions of the bill, with the upper chamber’s version garnering more bipartisan support. The Senate bill, which passed 68-32 in June 2021, would total roughly $250 billion, including $52 billion to fund the semiconductor research, design, and manufacturing initiatives.

But McConnell late last month said the competitiveness bill would lose Republican support if Democrats continued to pursue an unrelated reconciliation package to fund their climate, tax, and prescription drug goals, which is reportedly being negotiated by Schumer and Sen. Joe Manchin, D-W.V.

If it meets the Senate’s strict budget reconciliation rules, that spending package could pass the chamber with just a bare majority instead of the 60 votes required for most other bills to surpass the filibuster.

“Let me be perfectly clear: there will be no bipartisan USICA as long as Democrats are pursuing a partisan reconciliation bill,” McConnell tweeted June 30.

Senators and Biden administration officials hope to send the chip-funding legislation to the White House for President Joe Biden’s signature before Congress goes on its annual recess in early August.

“We want them to negotiate and get a bill done by August 4,” Commerce Secretary Gina Raimondo told reporters Wednesday. In an interview with Axios published that same day, Raimondo said, “There’s a real time urgency there, because these chip companies are making their decisions right now about where to expand.”

Secretary of Defense Lloyd Austin on Thursday made a national security-focused case for passing chip funding.

“Weapon systems employed on the battlefields of today and emerging technologies of tomorrow depend on our access to a steady, secure supply of microelectronics,” Austin said in a statement. “Our strategic competitors are making substantial investments in this area – China, the U.S. military’s pacing challenge, has already spent $150 billion updating its semiconductor industry.”

Current economic downturn ‘not even close’ to 2008 crisis