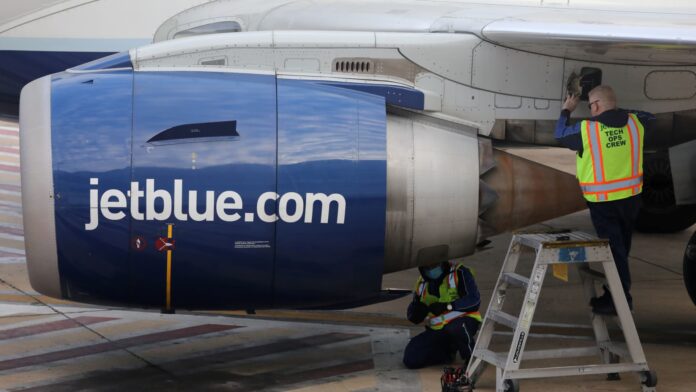 JetBlue could continue to struggle with its cost structure even if it acquires Spirit Airlines , according to Susquehanna Financial Group. Analyst Christopher N. Stathoulopoulos downgraded shares of JetBlue to neutral from positive, saying in a Tuesday note that the airline stock has struggled with unit costs, and may continue to do so after the possible acquisition. “Since our initiation on JBLU in 2019 (HERE), one of the consistent points of pushback from investors has been JBLU’s ability to grow margins,” Stathoulopoulos wrote. “While JBLU has made progress on its unit cost control since the launch of its Structural Cost Program in 2016, we see a tough road ahead for the LCC if JBLU acquires SAVE … or in a stand-alone scenario,” he added. Susquehanna lowered the price target by more than 35%, to $9 from $14. The new target is still about 11% above where the shares closed Monday. A possible merger with Spirit could mean a combined company with roughly 66% more available seats per mile based on 2019 figures, but a “similar” cost per available seat mile (CASM), the note said. The CASM is a measure that indicates how efficient an airline is. Susquehanna reviewed airline stocks that may soar on strong summer demand, though the analyst believes travel after Labor Day will show which names are and aren’t buys. “While we’ve yet to find any cracks in airline booking data, we believe that at some point consumers will have to contend with the economic reality of higher air fares, outsized general inflation, and potential layoffs in select industries (e.g., finance, tech, and media) into 2023,” read the note. — CNBC’s Michael Bloom contributed to this report.