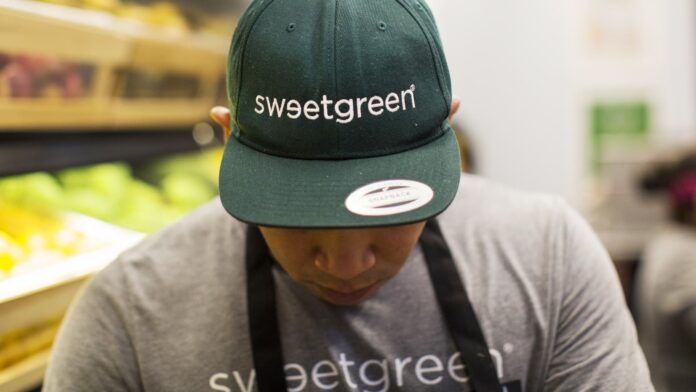 A worker wears a Sweetgreen Inc. hat while preparing food inside the company’s restaurant in Boston, Massachusetts.

Shares of Sweetgreen fell 10% in after-hours trading on Tuesday after the salad chain reported a wider-than-expected loss and lowered its full-year revenue outlook.

For 2022, the company now anticipates its revenue will be at or below its prior range of $480 million to $500 million. This marks the second consecutive quarter that it has lowered its revenue outlook.

In the third quarter, Sweetgreen said its same-store sales rose 6%, boosted entirely by menu price hikes. On Monday, the chain announced the launch of its first national dessert in an effort to push up sales.

Sweetgreen executives said in August that the company’s sales began softening around Memorial Day. They attributed the slowdown a number of factors, including summer travel, delays in the return to the office and another wave of Covid-19 cases.

Other restaurant chains have reported a broader shift in consumer spending tied to high inflation. Executives at Chipotle Mexican Grill and McDonald’s told investors that higher-income consumers are spending more at their restaurants, while some lower-income customers are dining out less frequently or buying cheaper menu items.

In August, Sweetgreen announced it laid off 5% of its support center workforce and planned to downsize to a smaller office building to save money. In the third quarter, it spent $11.1 million before taxes related to those restructuring costs. That figure includes $600,000 it spent abandoning future restaurant sites to streamline future development.

The stock has fallen 45% this year, as of Tuesday’s close, dragging its market value down to $1.9 billion.

Powerball and Mega Millions jackpots are both above $400 million