HomeBusinessThis woman died because of an abortion ban. Americans fear they could...
Business 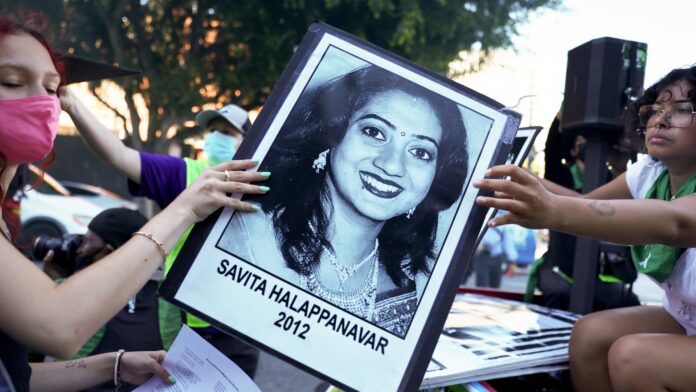 After the Supreme Court’s historic decision to overturn Roe v. Wade, some doctors are highlighting the 2012 death of a pregnant woman in Ireland and warning that the same thing could happen on a large scale in the United States.

Dr. Savita Halappanavar, a 31-year-old Indian-born dentist, died in 2012 in Galway, on Ireland’s west coast, after she was denied an abortion by doctors who cited the country’s strict laws, despite there being no chance of her baby’s survival, according to Ireland’s official report on the case.

Her death shook the foundations of the traditionally conservative and predominantly Roman Catholic country, and catalyzed its pro-abortion rights movement. In a 2018 referendum, Irish people voted by a two-thirds majority to legalize the procedure.

The avoidable death of Halappanavar, who was 17 weeks pregnant, proved that doctors  — not politicians, police and judges — should help decide the best course of action in similar cases, according to Dr. Sabaratnam Arulkumaran, the expert who in 2013 wrote the official report on the case.

“That’s why Biden said that the issue should be between the patient and the doctor, rather than with the law,” he told NBC News by phone, referring to President Joe Biden’s speech reacting to Roe v. Wade’s reversal June 24.

In Halappanavar’s case, doctors opted against an abortion because the fetus had a heart rate and anyone carrying out a termination could theoretically have been prosecuted at a later date.

“Because the fetal heart rate was present all the time, the obstetrician did not do a termination. If someone decided that she had done it illegally, she would have gone to jail,” he said, referring to the doctor attending on Halappanavar.

Arulkumaran, a professor emeritus of obstetrics and gynecology at St. George’s University of London, added that mothers’ lives are at stake in the United States.

“I think maternal mortality will go up,” he said. “I think those who are going to be affected are those from lower socioeconomic groups, adolescents, those who don’t have facilities to go for termination.”

Back pain first sent Halappanavar to Galway University Hospital on Oct. 21, 2012. She was sent home but returned just hours later after she “felt something coming down” and said she had “pushed a leg back in.” A midwife confirmed no fetal parts could be seen, according to the official report. Later that day, she described the pain as “unbearable,” according to the official report.

She was admitted and on Oct. 23, a doctor told her a miscarriage was “inevitable” due to the rupturing of the membranes that protect the fetus in the womb, despite the fact that her baby was a normal size and was registering a heart beat. The medical team had decided to “monitor the fetal heart in case an accelerated delivery might be possible once the fetal heart stopped,” the official report said.In Halappanavar’s case, an accelerated delivery would likely have meant a medically induced miscarriage.

When, on Oct. 23, Halappanavar and her husband, Praveen, asked about medically inducing the miscarriage instead of delaying the inevitable, a doctor told them: “Under Irish law, if there’s no evidence of risk to the life of the mother, our hands are tied so long as there’s a fetal heart[beat],” the official report said.

The report added that once their waters have broken, pregnant women are at very high risk of infection, which in some cases can be fatal.

On Oct. 28 at 1:09 a.m., having caught an infection and gone into septic shock, Halappanavar was pronounced dead.

“It was a life-threatening condition but they took the view of not doing anything because of the legal framework,” Arulkumaran said in the interview.

Praveen Halappanavar, who didn’t respond to a request for comment, told The Guardian newspaper in 2013 that the inquest into his wife’s death “vindicated” his version of events. He told the inquest that a doctor told him an abortion couldn’t be performed because “this is a Catholic country.

After the report was released University Hospital Galway apologized to Halappanavar’s family in a statement which said it “was clear” that “there were failures in the standards of care provided.”

“We can reassure all concerned that we have already implemented changes to avoid the repeat of such an event,” it added.

Threat to a mother’s life

While some American states have enacted “trigger laws” banning abortion   — some offering exceptions such as in the case of rape or incest, and all currently allow abortion if the mother’s life is seriously at risk — many experts question how easy it will be to get such an exception. In addition, asking doctors to interpret complex legislation in the middle of a medical emergency can lead to dangerous decisions, they said.

Irish law in 2012 allowed abortion to prevent a “potential major hazard or threat to the mother’s life.” But the Halappanavar report said a doctor decided the point at which an abortion was “allowable in Irish law” had not been reached.

This is not a theoretical scenario in the U.S., said Dr. Jen Gunter, an OB-GYN based in California and the author of “The Vagina Bible.”

“I’ve personally been in a situation where due to the state law, abortion was illegal at our medical center and we had a patient who needed one,” she said in an interview, declining to share any further details of the case aside from the fact that it was in Kansas, where abortion is legal up to 22 weeks with some restrictions.

“It wasn’t a pregnancy complication, her organs were failing because of the extra burden of pregnancy due to her underlying condition,” she added.

The attorneys at the medical center in Kansas told Gunter she couldn’t perform the abortion unless the woman was in “imminent danger.”

“I was like, ‘What does that mean?’ And their interpretation was that she was going to die in the next three minutes,” she said. Gunter said the hospital attorneys set up a call with the state politician involved in the legislation, who told her, “Do what you think is best, doctor.”

An ectopic pregnancy — in which a fertilized egg  implants and grows outside the uterus, often in a fallopian tube, and can endanger the life of the mother — could cause added confusion and untenable delays in treatment under the new laws, she said.

Gunter is unsparing in her prediction for what tighter abortion laws could mean in the U.S.

She said women could die despite better antibiotics to treat septic abortions.

“Halappanavar? That won’t ever change things in the States when that happens here, and it will happen.”

Lawmaker Ivana Bacik, leader of the Irish Labour Party and a long-standing advocate of abortion rights, led a protest against the Supreme Court decision outside the American Embassy in Dublin on Monday “in solidarity for American women and girls.”

“If you remove the right to abortion from women and girls, you endanger lives. The reality is that there will be life-threatening conditions in pregnancy that will threaten lives and health.”

Bacik said Halappanavar’s story was instrumental in turning public opinion toward a “yes” vote in 2018. As was the case of a brain-dead woman in Ireland whose life support machine was only turned off more than three weeks after she was declared clinically dead in 2014 following a protracted legal battle because she was 18 weeks pregnant.

In their submission to Ireland’s ongoing government review of abortion laws, a group of 20 women’s rights and heath care charities commissioned polling in March showing 67% of people across the island supported free access to abortion — mirroring the support for the “yes” vote in 2018.

Still, opponents to abortion rights in Ireland continue to fight. On Saturday, a Right to Life rally will take place in Dublin, where organizers are calling on sympathizers “to be a voice for the 6,500 babies being killed by abortion every year.”

Carol Nolan, an independent lawmaker representing the constituency of Laois–Offaly in the Irish midlands, opposed the law change in 2018 and argues that Halappanavar’s death has been “deliberately and continually” misrepresented by women’s rights campaigners.

“The factors that overwhelmingly contributed to Savita’s death were then, medical negligence and the mismanagement of maternal sepsis,” she said via email, adding that she believed the law prior to 2018 — known as the Eighth Amendment — was not a barrier to Halappanavar receiving proportionate and effective care.

“Following the removal of the constitutional amendment, we have seen an explosion in the numbers of abortions and the application of relentless political and nongovernmental pressure to further widen the parameters of the post-2018 law,” Nolan said.

There were 32 abortions in Ireland in 2018 and over 6,000 in each of the following two years, according to the latest figures available from the country’s government.

“This was entirely predictable,” Nolan added. “However, it has only served to vindicate my own view that the Eighth Amendment acted as a beacon of proportionality and sound law grounded in an authentic vision of human rights.”

The sometimes deadly intersection of law and medicine in the debate preoccupied those who support abortion rights, too.

Bacik, the Dublin lawmaker, cited the case of Andrea Prudente, an American woman who was denied an abortion after heavy bleeding in Malta on June 12. She was airlifted to Spain where she received treatment and the fetus was removed.

Multiple cases of women dying after being denied abortions have emerged from Poland, which has a near-total abortion ban. Last year, a 30-year-old woman known only as Izabela, who was 22 weeks pregnant, died of septic shock, her family said. Scans had shown multiple problems with the fetus but doctors refused to terminate while there was a fetal heartbeat, Reuters reported.

After fetal death, doctors could then legally operate. But Izabela’s heart stopped on the way to the operating theater to have a cesarean section.

At subsequent mass protests in Poland, flags were raised bearing the slogan: “Her heart was beating too.

Bank of America downgrades Kohl’s to underperform, sees risk with deal off table

Charts suggest the market could finish the year strong