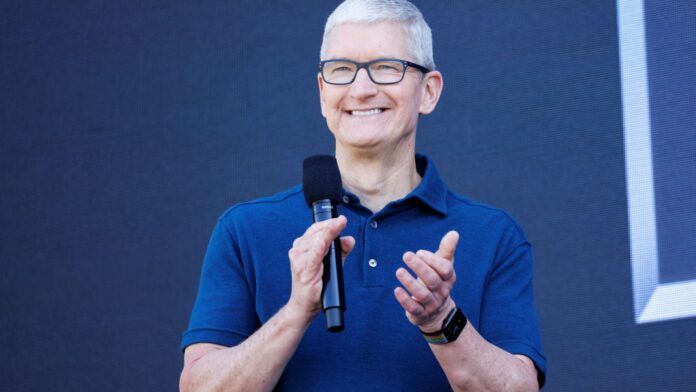 It’s just about the middle of the year, and there’s no end in sight for stock market volatility.

Investors, already reeling from sharp declines in stocks, were dealt another surprise last week as the Federal Reserve raised interest rates by three-quarters of a percentage point. The central bank was clear that it was taking steps to snuff out inflation, but its actions further fueled worries of an impending recession.

Investors are searching for a reminder to keep their long-term objectives in focus. The top Wall Street pros are naming their favorite picks, even as uncertainty looms, according to TipRanks, which tracks the best performing analysts.

Here are five stocks to highlight this week.

With more than $2 trillion in market capitalization, Apple (AAPL) is one of the largest companies in the world. It has all the resources to sail through the difficult times and keep growing with time.

Nonetheless, Apple’s size has not kept it immune from the current issues that are weighing the economy down. The iPhone-maker itself expects as much as an $8 billion hit on sales in the June-end quarter, due to the persistent component supply constraints, which have been aggravated by the Covid-led lockdowns in China. Moreover, Apple also expects revenue headwinds from the stoppage of shipments to Russia.

Macroeconomic headwinds are making Apple’s near-term outlook cloudy, but analysts are looking at the long-term prospects.

Deutsche Bank analyst Sidney Ho recently reiterated a buy rating on the stock despite trimming the price target to $175 from $200. Although Apple did not provide guidance for the fiscal third quarter, Ho expects low single-digit year-over-year growth, taking the growth obstructions into account.

Looking at the persistent geopolitical issues, rising interest rates and slowing consumer spending, the analyst said that he wouldn’t “be surprised to hear more chatter about Apple cutting orders.”

No doubt, the stock has shed almost 26% in 2022. But Ho finds this performance as good as, or even slightly better than its mega cap peers. Further, he said, the macroeconomic headwinds will not allow the AAPL stock valuation to reach its 5-year high of more than 30 times earnings per share in the next 12 months, giving another reason to consider adding the stock now. (See Apple’s Stock Chart on TipRanks)

Sidney Ho holds the spot at No. 127 among almost 8,000 analysts followed on TipRanks. Moreover, he has been successful at 72% of his stock ratings, returning an average of 22.3% on each.

Deutsche Bank’s Ho is also bullish on is NetApp (NTAP), which provides enterprise storage and data management solutions. The stock has been no stranger to the current setbacks weighing industries down, and its shares have declined about 30% in the year-to-date period.

The higher costs of components and logistics that resulted from supply chain constraints have dented the company’s margins. These issues are likely to be near-term hurdles.

Despite the headwinds, NetApp is showing tremendous execution capabilities, and the company has managed to keep its balance sheet strong and in a net-cash position. Having a strong balance sheet has helped this tech giant be consistent with its dividend payments. (See NetApp Dividend Date & History on TipRanks)

Ho points out that the company’s shares have underperformed its IT hardware peers by a significant margin in 2022. However, this has opened a great buying opportunity for compounding returns in the long run.

The analyst was a little disappointed when NetApp could not reach its own public cloud annual recurring revenue target due to higher customer attrition and salesforce turnover in the cloud operations unit. However, Ho is not too worried, as NetApp has plans in place to address these issues.

Additionally, Ho is confident that the company’s shift in focus from merger and acquisition activities to share buybacks will boost per-share earnings growth.

The analyst reduced the price target from $90 to $84, but upgraded the NTAP stock to buy from hold, keeping in mind the long-term upside.

Its upbeat quarterly results came as a breath of fresh air amid the disastrous winds of the season. Moreover, its guidance for the current quarter, which includes the acquired assets of Cerner, is also encouraging. Last December, Oracle announced it would acquire Cerner, which provides IT solutions for the health-care sector.

Monness Crespi Hardt & Co. analyst Brian White was among those optimistic about Oracle. He highlighted Oracle’s confidence in its cloud momentum, which it expects to continue in the fiscal year 2023.

White also finds significant upside potential to the current valuation despite his forward 12-month price-earnings target being above its recent highest valuation. This is based on the belief that “the successful creation of a solid foundation to support strong cloud growth in the coming years has the potential to increasingly provide the market with more confidence in the company’s long-term business model.”

White reiterated a buy rating on Oracle, but decreased the price target to $113 from $126 to account for near-term headwinds that are in store for the tech sector.

Out of almost 8,000 Wall Street analysts tracked by TipRanks, White holds the 579th position based on 55% successful ratings and 9.2% average return delivered on each rating.

Slightly deviating from the core technology sector, the next stock in top analysts’ radar is IHS Holding (IHS), which owns, operates, and develops shared telecommunications infrastructure. With an expanding international footprint, the current situation has made dollar availability to be relatively tight, and the shares of IHS declined almost 28% so far this year. (See IHS Holding Stock Chart on TipRanks)

Atkin considers IHS’s significant exposure to the African markets to be a key growth driver, as the continent has one of the highest subscriber growth rates. Infrastructure companies have a strong upside in the African markets as 2G and 3G are still common in the region, but they are bound to be upgraded in the future.

Additionally, Atkin is also confident about IHS’s capabilities to navigate challenges, given its strong track record in operating in Nigeria for 22 years. Notably, Nigeria markets have several operational, financial, and compliance challenges that make it difficult for international companies to operate.

Equipped with these, and many more observations, the analyst reiterated a buy rating on the stock with a $21 price target.

Jonathan Atkin ranks No. 15 among almost 8,000 analysts tracked on TipRanks, giving us all the more reason to consider his convictions about a stock. He has been successful in 75% of his ratings, generating 15.4% returns on each one.

Shares of Bank of America (BAC) are almost 30% down this year. Nonetheless, the banking behemoth benefits from the high interest rate environment. The bank’s CEO Brian Moynihan has said earlier that higher interest rates and growth in loans should improve net interest income meaningfully in the near term. (See Bank of America Stock Investors sentiments on TipRanks)

In a recent research report, RBC Capital analyst Gerard Cassidy seems to agree. “As a result of the expected increases in short-term interest rates, we increased our net interest income estimates which were more than offset in 2022 by lower than expected investment banking revenues but only partially offset in 2023,” he said.

Cassidy recalled that historically, monetary and fiscal policies have resulted in higher core deposits for BAC. He believes that the deposits are usually stickier than expected, giving more time to keep the deposits invested. Thus, the analyst expects the bank’s profitability to remain elevated initially into the monetary policy tightening cycle.

Cassidy maintained his bullish stance on BAC with a buy rating, but cut his price target to $45 from $51 solely based on lower valuation multiples.

Notably, Cassidy holds the 34th spot in a group of almost 8,000 analysts followed on TipRanks. Moreover, 67% of his ratings have been profitable, generating an average return of 22.8% per rating.

Texas reports what may be the first U.S. death from monkeypox