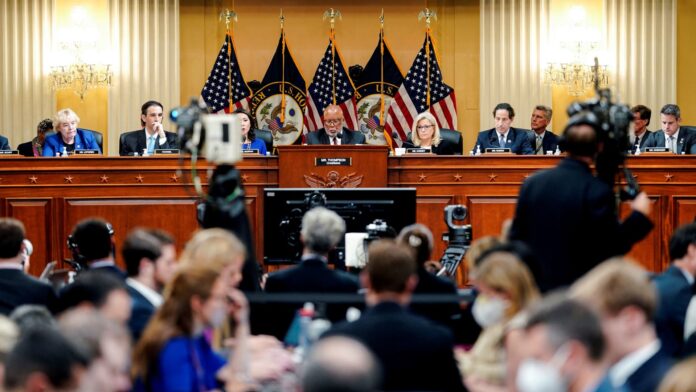 The House select committee investigating the Jan. 6 attack on the Capitol accused former President Donald Trump of trying to contact a witness, among the major revelations in the panel’s latest hearing Tuesday.

His move to try to connect with one of the witnesses was referred to the Department of Justice, according to Vice Chair Rep. Liz Cheney. A spokesperson for Trump did not respond to CNBC requests for comment.

It was among a swath of new information revealed during Tuesday’s public hearing. Former White House counsel Pat Cipollone told the committee in prerecorded testimony that he believed there was no widespread voter fraud, countering many of Trump’s long-standing claims that the 2020 presidential election was stolen from him.

Fight in the White House

The argument came in December 2020 while Trump and his allies were losing many of their legal challenges to the election results.

“I remember the three of them were really sort of forcefully attacking me verbally,” Cipollone said in describing the argument. The former White House counsel said he and other White House officials in the room said they had one overriding question: Where is the evidence of fraud and general election malfeasance?

Eric Herschmann, a former White House legal advisor, said in his testimony that he took Powell on directly during the White House argument.

“I’m being nice. I was much more harsh to her,” Herschmann said.

Ex-Trump campaign manager Brad Parscale blamed then-President Trump‘s rhetoric for the death of a woman involved in the Jan. 6 Capitol riot, according to new evidence shared Tuesday by the committee.

In text messages sent on the evening of Jan. 6, longtime Trump supporter Parscale said that the riot was “about trump pushing for uncertainty in our country.”

Screenshots of the texts were displayed during the select committee’s latest public hearing Tuesday afternoon, which focused largely on the involvement of domestic violent extremist groups in the Jan. 6 insurrection.

“This week I feel guilty for helping him win,” Parscale wrote.

Bannon speaks to Trump on Jan. 5

The House committee also showed that former White House chief strategist Steve Bannon spoke to Trump on Jan. 5 before the infamous attack the next day.

After Bannon’s first of two calls on Jan. 5 with Trump, the former White House advisor went on his podcast and said “All hell is going to break loose tomorrow.”

The next day, a group of Trump supporters attacked the Capitol.

Share
Facebook
Twitter
Pinterest
WhatsApp
Previous article
West Virginia will give $20,000 as states up ante in war for workers
Next article
Valuation multiples have fallen. Here’s what happens if earnings do
RELATED ARTICLES
Politics