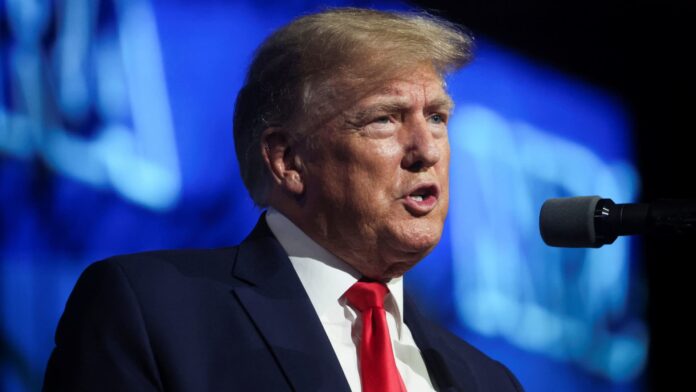 A federal criminal investigation is threatening the proposed merger between former President Donald Trump’s social media enterprise and a special purpose acquisition company, a deal that would give the combined company access to billions of dollars in public markets.

That company, Digital World Acquisition Corp., revealed in a securities filing Monday that it became aware on June 16 that each member of its board of directors received subpoenas from a federal grand jury in New York.

The grand jury wants similar documents that the Securities and Exchange Commission had been seeking in its already-disclosed civil probe, DWAC said. The company received a subpoena itself Friday with similar requests, along with other requests relating to communications, individuals and information involving Rocket One Capital.

DWAC also revealed Monday that a board member, Bruce J. Garelick, had told management that he would resign from the board last Wednesday. Garelick said his resignation “was not the result of any disagreement with Digital World’s operations, policies or practices,” according to the company filing. Garelick is listed as chief strategy officer for Rocket One Capital. The firm’s website was effectively blank Monday morning, saying: “Site will be available soon. Thank you for your patience!”

DWAC warned that the subpoenas and the probes by the SEC and the U.S. Justice Department could delay or even prevent its merger with Trump’s social media company. Shares of the company fell more than 10% in early trading. DWAC didn’t immediately respond to a request for comment.

The development is the latest political headache for Trump. Due to the public hearings held by the committee probing the Jan. 6 pro-Trump assault on the Capitol, Trump is facing intense scrutiny over his alleged role in plots to overturn the results of the 2020 election. He is considering jumping into the 2024 White House race, as well.

The Trump Media & Technology Group announced in October that it had agreed to merge with DWAC with the end goal of Trump’s company “becoming a publicly listed company, subject to regulatory and stockholder approval.” That merger would grant Trump’s company and its social media platform, Truth Social, over $1 billion in capital and its own stock-market listing.

Trump Media didn’t immediately reply to a request for comment.

Trump’s company is led by former GOP Rep. Devin Nunes, who was one of Trump’s most loyal defenders in Congress. Trump Media’s Truth Social has already launched. The former president founded it as an alternative to Twitter, which banned him over his tweets on Jan. 6 as he continued to push the false narrative that the election was stolen from him.

The disclosures mark the latest hiccup for the so-called SPAC, which is a type of shell company created to raise capital in public equity markets with the ultimate goal of purchasing or merging with a private firm.

Truth Social and its planned tie-up with DWAC hit snags from the start.

One of the first criticisms came from Sen. Elizabeth Warren, D-Mass., who urged SEC Chairman Gary Gensler in November that DWAC “may have committed securities violations by holding private and undisclosed discussions about the merger as early as May 2021, while omitting this information in [SEC] filing and other public statements.”

Shares of DWAC have lost more than half their value in 2022. That’s far worse than the broader market’s poor performance this year: The S&P 500 has declined a far-less-severe 18.2% over the same period.

Palantir CEO Alex Karp weighs in on the Ukraine war

Citi downgrades Bank of America, says gains will be hard to come by for the banking stock