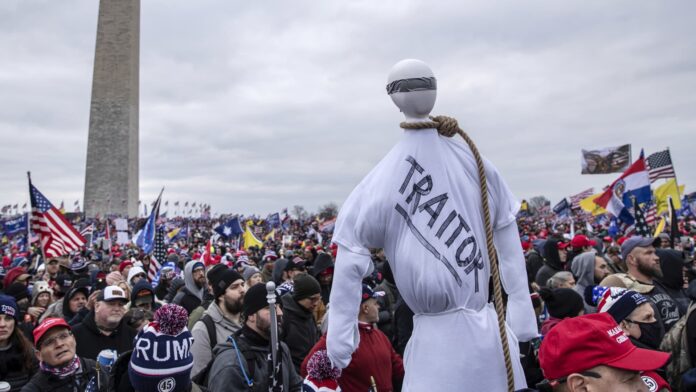 A demonstrator holds a mannequin wearing a noose with “Traitor” written on it during a protest at the Washington Monument in Washington, D.C., U.S., on Wednesday, Jan. 6, 2021.

The committee’s third public hearing examined the intense pressure Trump and his allies heaped on Pence to reject key electoral votes when he presided over a joint session of Congress on Jan. 6, 2021, to confirm President Joe Biden’s victory. The hearing also focused heavily on John Eastman, a lawyer advising Trump who pushed the dubious legal theory that Pence held virtually unilateral power to overturn the election.

Here are the main takeaways from the hearing:

Pence’s life was in danger

Pence came within about 40 feet of some of the pro-Trump rioters who stormed the U.S. Capitol building, said Rep. Pete Aguilar, D-Calif., who led much of Thursday’s hearing.

“Make no mistake about the fact that the vice president’s life was in danger,” Aguilar said.

He noted that a confidential informant from the Proud Boys told the FBI that members of the far-right group “would have killed Mike Pence if given a chance,” according to a recent court filing by the Department of Justice.

Pence did not leave the Capitol on Jan. 6, but was transferred to a secure location during the riot.

Pence showed “courage” on that day by defying Trump, committee chairman Rep. Bennie Thompson, D-Miss., said at the start of the hearing.

But that resolve put the vice president in “tremendous danger” when Trump “turned the mob on him,” Thompson said.

Witnesses, both in person and in taped depositions, testified that numerous officials told Trump and Eastman that Pence could not carry out the legal scheme to overturn the 2020 contest. But Trump and Eastman nevertheless continued to pressure Pence and his team.

Pence’s former chief of staff, Marc Short, said in a taped interview with the committee that the vice president himself told Trump “many times” before Jan. 6 that he did not have the legal authority to block the certification of the election.

Former Trump campaign spokesman Jason Miller said he had heard that former White House counsel Pat Cipollone “thought the idea was nutty and had at one point confronted Eastman with the same sentiment.”

Other officials also thought Eastman’s theory “was crazy” and would tell “anyone who would listen,” Miller said.

What’s more, former Pence counsel Greg Jacob told the panel that Eastman admitted one day before the Capitol riot that his legal theory would be rejected 9-0 if it went before the Supreme Court.

On the morning of Jan. 6, Trump raged at Pence in a tense phone call. He said the vice president was weak and a “wimp,” witnesses told the committee. Ivanka Trump’s former chief of staff, Julia Radford, said that Trump’s daughter told her after the call that the president had called Pence “the P word.”

In a rally outside the White House that began shortly before the mob breached the Capitol, Trump again heaped pressure on Pence to reject the election results: “All Vice President Pence has to do is send it back to the states to recertify, and we become president.”

Eastman sought a presidential pardon after the riot

Eastman told former Trump lawyer Rudy Giuliani that he wanted to be added to the list of presidential pardon recipients, the committee revealed.

“I’ve decided that I should be on the pardon list, if that is still in the works,” Eastman wrote, according to a screenshot of an email displayed during the panel’s third hearing.

That email was sent days after the Capitol riot, Aguilar said. It also came after a Jan. 7 conversation with White House lawyer Eric Herschmann, who said he told Eastman, “I’m going to give you the best free legal advice you’re ever getting in your life: get a great effing criminal defense lawyer, you’re going to need it.”

Trump did not pardon Eastman. Under questioning by the Capitol riot investigators, Eastman pleaded the Fifth 100 times, Aguilar said.

Trump pardoned numerous allies during his final days in office.

The investigation, and the threat to democracy posed by the riot, are ongoing

The select committee is slated to hold four more public hearings in June. During each, lawmakers intend to lay out a different element of a coordinated conspiracy to subvert the 2020 election.

The panel has teased its plans to show in future hearings how Trump tried to get the Justice Department to challenge the election results, how he pushed officials in key states to undo Biden’s victories, and how he led a violent mob to march on the Capitol on Jan. 6.

Committee aides have stressed that the hearings represent only the initial findings from the nearly year-long probe, and that the investigation is ongoing.

That was made especially clear on Thursday, as committee leaders Thompson and Rep. Liz Cheney, R-Wyo., confirmed that they want to speak with Ginni Thomas, the conservative activist and wife of Supreme Court Justice Clarence Thomas. Ginni Thomas has come under intense scrutiny in recent months following reporting on her efforts to challenge the 2020 election results.

Retired federal Judge J. Michael Luttig, meanwhile, warned in Thursday’s hearing that Trump remains a “clear and present danger” to American democracy, which was gravely threatened on Jan. 6 and is now “on a knife’s edge.”

The next hearing is set or Tuesday at 1 p.m. ET.

Disney reaches deal with Third Point, will add former Meta exec to its board