HomeEuropeU.N. to investigate the killing and wounding of children in Ukraine
Europe

U.N. to investigate the killing and wounding of children in Ukraine 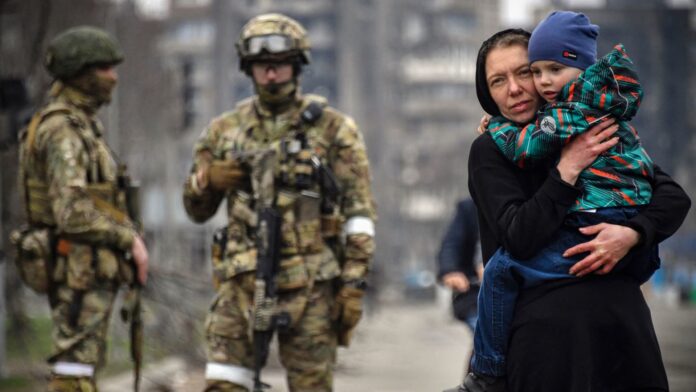 A woman holds a child next to Russian soldiers in a street of Mariupol on April 12, 2022, as Russian troops intensify a campaign to take the strategic port city, part of an anticipated massive onslaught across eastern Ukraine, while Russia’s President makes a defiant case for the war on Russia’s neighbour. – *EDITOR’S NOTE: This picture was taken during a trip organized by the Russian military.*

UNITED NATIONS — U.N. Secretary-General Antonio Guterres ordered an investigation on Monday into the deaths and injuries of children in Ukraine as the Russian conflict intensifies in the war-torn country.

Guterres called for the findings to be published in the U.N.’s annual “Children and Armed Conflict” global report which verifies accounts of abduction, sexual violence as well as other violations like the recruitment of children to fight in conflicts.

“In view of the ongoing war in Ukraine, including violations against civilians, including children, because of the high intensity of this conflict, this situation will be added as a situation of concern with immediate effect and will be included in my next report,” Guterres wrote in this year’s report, which was released on Monday.

Guterres also requested similar investigations to be carried out in Ethiopia and Mozambique.

Monday’s report found more than 2,500 children were killed in global conflicts in 2021 and an additional 5,555 were maimed. The highest number of verified violations against children were documented in Yemen, Syria, Afghanistan, the Democratic Republic of the Congo, Somalia, Israel as well as Palestinian territories.

The call for an investigation in Ukraine comes as U.N. High Commissioner for Human Rights Michelle Bachelet warns that her office has gathered mounting evidence that Russian forces carried out unlawful killings and summary executions.

Bachelet said that U.N. investigators have recovered more than 1,200 civilian bodies from Kyiv and that her office is working to corroborate more than 300 allegations of killings by Russian forces in situations that were not linked to active fighting.

An avenue in Mariupol on April 12, 2022. The besieged Ukrainian city could now be facing a deadly cholera outbreak, NBC News cited local officials.

In April, the U.N. voted to strip Russia of its membership in the Human Rights Council following accusations that Russian troops tortured and killed Ukrainian civilians in Bucha, a suburb near Kyiv.

The bodies were discovered after Moscow withdrew its troops from Bucha. Ukrainian President Volodymyr Zelenskyy described the aftermath, which he saw firsthand on Monday, as a “genocide” and accused Russia of war crimes.

The Kremlin has previously described its military actions in Ukraine as a “special operation” and has denied targeting civilians.

A child eats as people wait for a train to Poland at the railway station of the western Ukrainian city of Lviv on March 6, 2022, 11 days after Russia launched a military invasion on Ukraine.

Last month, the U.N. Children’s Fund, or UNICEF, said nearly two-thirds of Ukraine’s children have been displaced since the start of the Kremlin’s war in late February.

“I would say every single child in Ukraine, their lives have been touched by this war. They’ve either lost a family member or they have either witnessed trauma themselves,” Afshan Khan, the regional director UNICEF, told reporters at the United Nations.

“With two-thirds of the children in the country on the move, we cannot say that a single child’s life has not been touched,” added Khan.

Khan also said that the staggering number of schools destroyed by Russian strikes in Ukraine presents another grim challenge for child development.