U.S. calls on Russia to halt forced deportations of Ukrainians 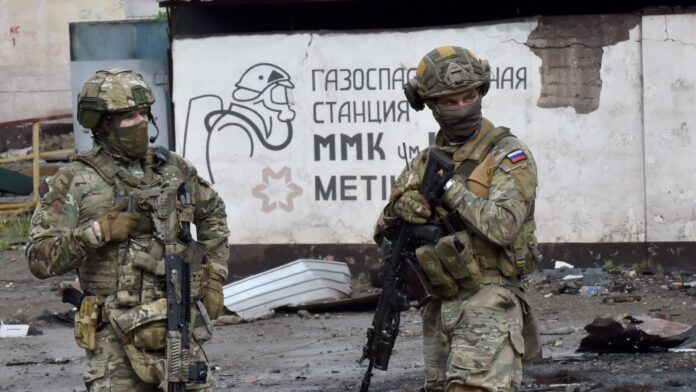 Russian servicemen stand guard at the destroyed part of the Ilyich Iron and Steel Works in Ukraine’s port city of Mariupol on May 18, 2022.

WASHINGTON – The Biden administration called on Russia to immediately release civilians that it says were forcibly deported from Ukraine, an accusation that would classify as a war crime.

“The unlawful transfer and deportation of protected persons is a grave breach of the Fourth Geneva Convention on the protection of civilians and  is a war crime,” Secretary of State Antony Blinken wrote in a statement referencing a U.N. agreement to which Russia is a signatory.

Blinken said the U.S. suspects that between 900,000 and 1.6 million Ukrainian citizens, including 260,000 children, have been detained and deported from their homes to Russia.

“Russian authorities must release those detained and allow Ukrainian citizens forcibly removed or coerced into leaving their country the ability to promptly and safely return home,” Blinken wrote.

Surrendered servicemen of Ukraine’s national battalion “Azov”, which is an all-volunteer infantry military unit, are being transferred to Yelenovka in Mariupol, Ukraine on May 17, 2022.

The filtration camps, which have been previously described as large makeshift tents, are initial reception areas where deported Ukrainians are photographed, fingerprinted, stripped, forced to turn over their mobile phones, passwords as well as identification, and then interrogated and sometimes tortured by Russian authorities.

Blinken accused Moscow of ordering the “disappearance” of thousands of Ukrainian civilians who do not pass the dehumanizing “filtration” process of the deportation procedure.

“Those detained or filtered out include Ukrainians deemed threatening because of their potential affiliation with the Ukrainian army, territorial defense forces, media, government, and civil society groups,” Blinken wrote.

He also said that the Kremlin’s filtration program appears to have been premeditated and mirrors similar operations carried out by Russian forces during other conflicts, including in Chechnya.

Residents of the city of Lysychansk cook food outside their houses, as the city is without electricity and water, in the eastern Ukrainian region of Donbas, on May 26, 2022, amid Russia’s military invasion launched on Ukraine.

U.N. High Commissioner for Human Rights Michelle Bachelet warned last week that her office has gathered a staggering amount of evidence that indicates Russian forces have carried out unlawful killings and summary executions of Ukrainians.

Bachelet said that U.N. investigators have recovered more than 1,200 civilian bodies from Kyiv and that her office is working to corroborate more than 300 allegations of killings by Russian forces in situations that were not linked to active fighting.

Earlier this year, the U.N. voted to strip Russia of its membership in the Human Rights Council following accusations that Russian troops tortured and killed Ukrainian civilians in Bucha, a suburb near Kyiv.

The bodies were discovered after Moscow withdrew its troops from Bucha. Ukrainian President Volodymyr Zelenskyy described the aftermath, which he saw firsthand on Monday, as a “genocide” and accused Russia of war crimes. Similar reports of what unfolded in Bucha have since emerged in cities throughout Ukraine.

The Kremlin has previously described its military actions in Ukraine as a “special operation” and has denied all claims that its forces target and kill civilians.

These solar companies could beat expectations this earnings season, according to Goldman