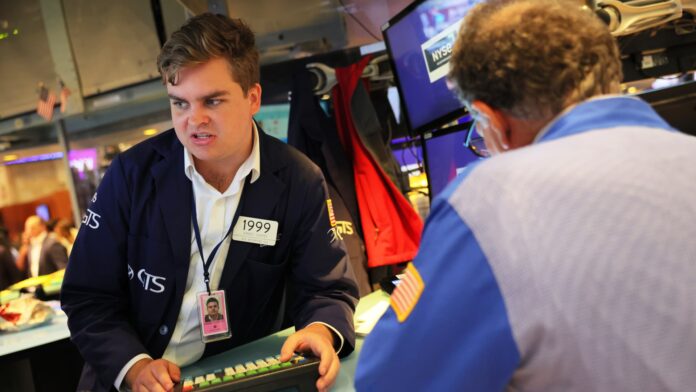 This is the daily notebook of Mike Santoli, CNBC’s senior markets commentator, with ideas about trends, stocks and market statistics. There was not much to like in the June CPI report : Nothing to dissuade the Fed from staying aggressive in attacking inflation — but also not much new enough to shock the market or to invalidate the notion that June was the peak for consumer price momentum. The collapse in oil, gasoline and other commodities in recent weeks likely kept the acceleration in month-over-month headline and core CPI from keeping the market too spooked by the numbers. “Up off the lows” is not exactly a celebration or a sign that all the likely tough news is priced in, but shows, once again, that the market is trying to build calluses against the inflation/tightening/recession-risk stories. Still very inconclusive. A fairly tepid oversold bounce in the S & P 500 sags back just below levels first reached briefly almost seven weeks ago (3,810 during the trading session on May 20), still a touch above last week’s lows, a cool 21% under the record highs. Precarious but not panicky. The market as a first reflex lifted projected Fed rate hike expectations, adding some chance of a full percentage point bump in two weeks and perhaps a heftier boost in September. Still mostly about the terminal rate and how much damage the economy will suffer in the meantime. The market wants to position for the inflection point when the Fed is about done, the central bank demanding several months of real numbers going their way. Mismatched timelines for sure, though the market has already priced in plenty of slowing with massive underperformance by cyclical sectors in recent months. The yield curve the Fed watches as a more reliable indicator of anticipated recession is the 10-year minus the 3-month Treasury . It’s narrower but still a good bit above zero. As the Fed hikes in big increments and time shoves on, of course, the 3-month yield will go higher by necessity, so it’s easy to see this triggering before long. Note this went negative in 2006, a year and a half before a recession began, and after it went negative stocks were making new cycle highs for more than a year afterward. It also clicked below zero in May 2019 , though let’s withhold credit for foretelling the 2020 recession, given it’s hard to see it happening when it did without Covid erupting. Still a chance that getting past the CPI release makes it a bit of a “clearing event” as macro influences peak and recede for a bit (dollar off the highs, yields still in their multimonth range, oil correcting) — just in time for companies to start getting all the attention for earnings/guidance. Everyone is saying that consensus forecasts are too high . Might be true for coming quarters, but there’s no way this is fully news to the market. Much whipsawing and conference call reversal action is a pretty good bet for the next couple weeks of reporting season. More economists are migrating from a “soft-ish landing” call to handicapping what most will call a “mild” recession starting in coming quarters. Each is plausible, all of it involving layers of assumptions. As suspect as it usually is to argue “it’s different this time,” it does seem this won’t necessarily be a textbook recession given tight labor dynamics, housing unit shortages, consumer savings cushions and the brevity of this expansion, which didn’t have a chance to build up too many excesses on Main Street. Also, the Wall Street extremes (cult unprofitable tech, crypto) have to a large degree been unwound. Something can always break along the way, of course, which is why illiquid bond markets, widening credit spreads, spillovers from crypto collapse, policy error (Remember the ECB over-tightening due to oil prices in ’08 and ’11?) and who knows what else go in the “watch it closely” column. Market breadth today is middling: 40/60, up/down after an uglier opening. VIX very sticky just above 25, now in the 27s. It’s kept aloft by grinding downtrend, very twitchy bond/FX markets, but suppressed by lack of demand for immediate plunge protection. Uneasy but getting used to it?