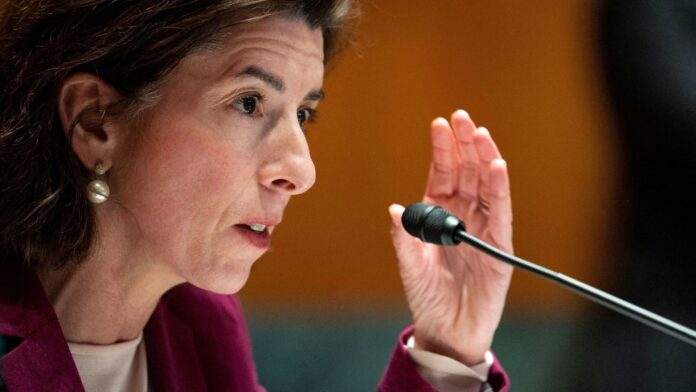 Commerce Secretary Gina Raimondo warned on Wednesday that the country’s current dependence on foreign computer chip fabrication puts it at risk of a recession if it’s ever cut off. Her comments come as Congress nears key votes on a bill to fund U.S. semiconductor manufacturing,

While many computer chips are designed in the U.S. by companies like Intel, Raimondo told CNBC’s Sara Eisen on “Closing Bell” Wednesday, that the location of the manufacturing is just as important.

“If you allow yourself to think about a scenario where the United States no longer had access to the chips currently being made in Taiwan, it’s a scary scenario,” Raimondo said. “It’s a deep and immediate recession. It’s an inability to protect ourselves by making military equipment. We need to make this in America. We need a manufacturing base that produces these chips, at least enough of these chips, here on our shores because otherwise we’ll just be too dependent on other countries.”

The more than $50 billion CHIPS Act would help subsidize the creation of semiconductor manufacturing plants in the U.S.

Computer chips are used in a range of internet-connected devices, from smartphones to medical technology to cars.

The bill, which cleared a procedural hurdle in the Senate on Tuesday but still must pass both chambers, has support on both sides of the aisle, though some lawmakers have questioned the need to subsidize companies that have engaged in stock buybacks. The bill now includes a prohibition on using the funds for buybacks or dividends.

The semiconductor industry has lobbied hard for the bill’s passage, with Intel warning its planned manufacturing plant in Ohio, in which it said it would initially invest $20 billion, could be delayed as a result of any stalling from Congress.

Raimondo addressed criticism of the heavy funding of this one industry by calling semiconductors “a cornerstone technology necessary to underpin every other innovation-based industry.”

She added that the country’s heavy dependence on foreign chip manufacturing, with what she said is 90% of leading-edge chips purchased from Taiwan, creates a national security risk.

She said it’s also important to ensure companies are incentivized to expand chip manufacturing in the U.S., rather than to be lured to invest in other countries that may offer attractive benefits.