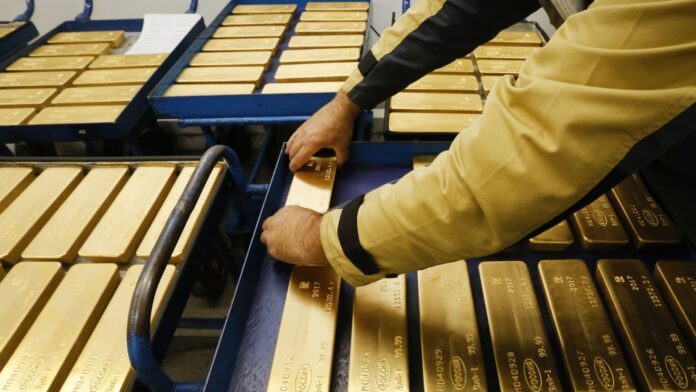 The Treasury Department on Tuesday announced that the U.S. and a handful of key economic allies will prohibit imports of Russian gold, Moscow’s largest export outside of the energy sector.

The expanded sanctions represent the latest effort by the U.S. and some of its Group of Seven partners to target Russian President Vladimir Putin and alienate the country’s economy from international commerce and payments systems.

The United Kingdom, Canada and Japan are joining in the effort.

Treasury Secretary Janet Yellen has touted the multilateral approach to enforce economic penalties as crippling to Moscow and a severe punishment for Putin’s monthslong invasion of Ukraine.

Treasury also announced Tuesday that its penalties now target an additional 70 Russian companies and other entities critical to the country’s defense industrial and manufacturing base.

“Broad multilateral commitments and actions by G7 members this week further cut off the Russian Federation’s access to technology that is critical to their military,” Yellen said in a press release. “Targeting Russia’s defense industry will degrade Putin’s capabilities and further impede his war against Ukraine, which has already been plagued by poor morale, broken supply chains and logistical failures.”

The ban against gold mined in Russia does not apply to metal that was located outside of Russia prior to Tuesday’s declaration, the Treasury added.

The decision came as President Joe Biden and other world leaders from the Group of Seven gathered for meetings in Germany. Countries sympathetic to Ukraine have already stopped most trade with Moscow, frozen hundreds of billions of dollars’ worth of Russian funds held in foreign accounts and banned Russian banks from using a global messaging system known as SWIFT.

Russian officials and oligarchs had been suspected of ramping up gold production to blunt the impact of global restrictions and economic penalties that have left Moscow bankrupt.

Still, it is unclear how big of an effect the move will have on the Russian war in Ukraine.

The U.S. and its partners have struggled to keep economic pressure on Putin without causing too much backlash on their own economies and in the face of China’s continued purchases of Russian goods.

Global oil and gasoline prices spiked in the first half of 2022, signaling that Beijing’s purchases of Russian petroleum amount to hefty profits for Moscow even as European and American consumers balk at steep prices at gas stations.

The U.S. national average price for a gallon of regular gasoline was $4.88 on Tuesday, off of the record $5.016 hit earlier in the month.

Tech workers’ company shares slid in 2022 – and so has their wealth. Three steps they can take