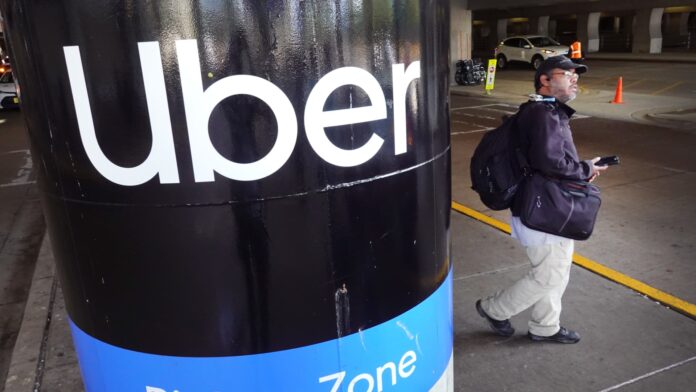 A traveller waits for an Uber rider at Midway International Airport on May 09, 2022 in Chicago, Illinois. Uber plans to cut spending and hiring in an attempt slow the company’s plummeting stock price, which is down nearly 50 percent for the year.

Check out the companies making headlines in midday trading Tuesday.

Abiomed – Shares of the heart pump maker surged 50% after the company announced it has agreed to be acquired by Johnson & Johnson for $16.6 billion in cash. Johnson & Johnson is looking to boost growth at its medical devices unit after it completes plans for a spinoff of its consumer health business next year. J&J shares fell 1%.

Pfizer – Shares of the pharmaceutical giant jumped nearly 3% after the company reported stronger-than-expected earnings and issued an improved financial outlook. Pfizer said strong demand for its older drugs helped offset a drop in sales of its Covid-related products. The stock is still down about 19% this year.

Peloton – Shares of the struggling home fitness company were up 5.8% as its products went live on the Dick’s website Tuesday. Dick’s shares added 2.4%.

Molson Coors Beverage – Shares of Molson Coors fell 3.8% after the beer giant reported earnings that fell short of expectations. The brewer of Coors Light, Miller Light and Blue Moon had third-quarter earnings per share of $1.32, versus a StreetAccount estimate of $1.35.

Goodyear Tire – Shares fell 13% after the tire company’s earnings fell short of expectations due in part to higher costs and a surging dollar.

Amazon – Shares of the e-commerce giant lost 5.2%. Deutsche Bank reiterated the stock as a buy and said it was well positioned, but did concede that macro challenges were challenging advertising budgets.

Carvana — Shares advanced 11.9% after JPMorgan upgraded Carvana to neutral from underweight, saying the company and investors have a better handle on the risks in the used car seller after its decline this year.

SoFi – The fintech company jumped 10% on the back of a smaller-than-expected quarterly loss and revenue that exceeded analysts’ forecasts. SoFi also issued upbeat guidance and said added about 424,000 members during the quarter.

Stryker – The medical technology company dropped 4% after cutting its outlook due to inflation and foreign exchange pressures.

Eli Lilly – The drug manufacturer dropped 4.8% after it cut its full-year forecast, citing the stronger dollar and increased competition.

Hologic – The medical equipment maker popped 8.6% following its report of quarterly profit that was above expectations. Hologic also issued a strong outlook.

Avis Budget – Shares of the rental car company slid 8% despite Avis beating expectations on quarterly earnings amid a resurgence of travel.

Gartner – The research firm was up 7.5% after it beat per-share earnings expectations, according to StreetAccount, and issued positive full-year guidance.

Ecolab – Shares of the science company lost 8.5%. Revenue came in slightly above expectations when reporting earnings, but the company said it is expecting negative headwinds from foreign conversion rates that will weigh on full-year guidance.

Deckers Outdoor — Shares jumped 4.3% after Bank of America reinstated coverage of Deckers Outdoor with a buy rating, saying the footwear company has a strong portfolio of brands led by Hoka and Ugg that will help the stock outperform.

IDEXX Laboratories – Shares added 7.8% after the company gave full-year guidance showing earnings per share between $7.74 and $7.98 compared to a FactSet estimate of $7.89. Expected revenue was set at $3.325 billion to 3.365 billion against FactSet’s $3.35 billion forecast.

Three painful lessons for investors in 2022. How to put them to work in the new year

Cheapest airline tickets? How to save money on flights and airfare