Ukraine looks to tech to rebuild economy after Russia invasion 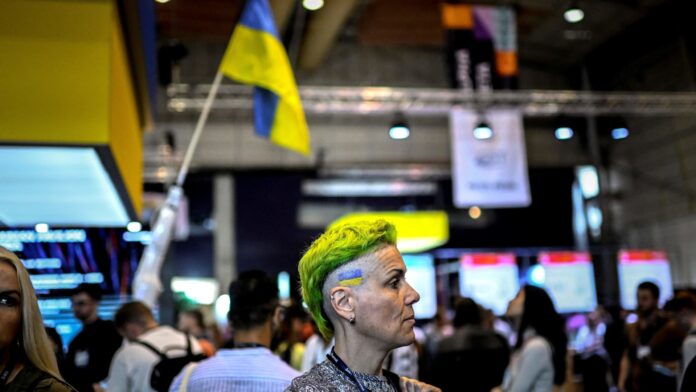 An attendee passes by the Ukraine stand at the Web Summit 2022 tech conference in Lisbon, Portugal.

LISBON, PORTUGAL — As the war in Ukraine rages on, the country’s technology entrepreneurs are trying to stay positive.

“I don’t think there’s something in the world that could kill our ability to win and ability to do work or anything,” Valery Krasovsky, CEO and co-founder of Sigma Software, told CNBC on the sidelines of the Web Summit tech conference in Lisbon.

Sigma, which has 2,000 employees based in Ukraine, equipped its offices with diesel generators and Starlink internet terminals to allow employees to continue working amid Russian shelling of critical energy infrastructure.

“Nothing could happen that would stop us delivering business, even in these conditions,” he added.

Sigma was one of 59 Ukrainian start-ups that attended the event last week. Ukraine had a notable presence at Web Summit, where it sought support from the global tech community to bolster its fight against Russia.

In 2021, Ukraine had a small booth at Web Summit, Krasovsky said. This year, it had a much larger stand, lit up in yellow and blue. It was surrounded by floods of visitors, with Ukraine’s first lady Olena Zelenska — accompanied by armed guards as she passed through the venue — among them.

On the opening night, Zelenska made an impassioned speech calling on tech entrepreneurs and investors to aid her country.

“You are the force that moves the world,” Zelenska, the wife of Ukrainian President Volodymyr Zelenskyy, told a packed audience Tuesday.

Whereas Russia uses technology for “terror,” the international community has “technologies that can help, not destroy,” she added.

Russia has called its invasion a “special military operation.” To Ukraine, however, it is an unprovoked land grab aimed at undermining its sovereignty.

Ukrainan officials and entrepreneurs said tech would be key in helping the country rebuild after Russia’s invasion.

Moscow began its invasion of Ukraine in February and the war has decimated the country’s economy. Its gross domestic product has shrunk by 30% so far this year, according to figures from the economy ministry.

The World Bank estimates that Ukraine’s gross domestic product will contract 45% during the whole of 2022.

Shvets runs Reface remotely from London, where he lives with his wife and their four-year-old daughter. Around half of his near-200 person team continue to work in Ukraine. When the bombing starts, people use the basement of Reface’s Ukraine outpost as a shelter to hide.

Reface has rented a hotel for 50 people in the Western part of Ukraine with separate infrastructure for electricity so they can continue to work safely, Shvets said. It has tried to “organically” relocate workers to Portugal, he added — but convincing them to leave has been difficult.

“People have houses, families in Ukraine,” he said.

In an interview with CNBC’s Karen Tso, Ukraine’s first lady said it was “impossible to underestimate” the role of technology in Ukraine.

“In this situation, it’s hard to talk about sustainability, technology, progress, since we’re just trying to hold on and live our lives as normal as possible,” Zelenska said. “Still, we have lots of startups, and I hope that all the ideas presented at this summit can push us to victory.”

As winter approaches, however, Ukraine will need more than just IT investment to see it through the harsh months ahead.

There have been reports of widespread power blackouts lasting several hours across the country. Around 40% of Ukraine’s energy system has been destroyed, according to the government.

Ukraine’s IT industry brought in $2 billion of revenue in the first quarter of 2022, according to the National Bank of Ukraine, an increase of 28% year-on-year despite the devastation caused by Russia’s invasion.

The war has displaced millions of Ukrainians, including technology professionals. Many have joined roles overseas. Once the fighting ends, it is hoped that those workers will return.

Some companies are ramping up hiring in Ukraine in a bet that the country’s tech industry will emerge stronger after the war ends.

Two months ago, Lithuanian VPN software firm Nord Security opened an office in the western Ukrainian city of Lviv. The company plans to hire 100 people there, according to CEO Tom Okman.

“We think it’s time to build back Ukraine and we think the talent there is great,” Okman told CNBC.

He noted Ukraine is home to thousands of skilled software programmers and engineers. “Just think how many American companies have IT outsourcing” in Ukraine, he said.

Several founders of billion-dollar “unicorns” come from Ukraine, including Grammarly’s Max Lytvyn and Alex Shevchenko and GitLab’s Dmitriy Zaporozhets. Google, Samsung and Amazon also have research and development centers in the country.

But there are challenges beyond the war facing Ukraine’s tech ecosystem. The country’s venture landscape is still emerging. Startups in the country attracted only $22 million so far this year, according to Dealroom data.

“There are no big inflows in capital to support what we do,” Reface’s Shvets said. “What we should do properly now is show more examples of entrepreneurship.”

Shvets said the government in Ukraine should look to assist local entrepreneurs in the country with tax incentives and other pro-business initiatives.

There are signs that sentiment from tech investors to Ukraine is improving, though. Last month, Horizon Capital, a Kyiv-based VC firm, raised $125 million for a startup fund aimed at backing Ukrainian founders.

SID Venture Partners, a venture fund set up by Sigma and fellow Ukrainian tech firms Ideasoft and Datrics, has so far invested in 10 startups with Ukrainian founders, Krasovsky said.

It plans to raise an additional $50 to $60 million from institutional investors after raising an initial $15 million in December 2021. “There’s huge interest,” Krasovsky said.