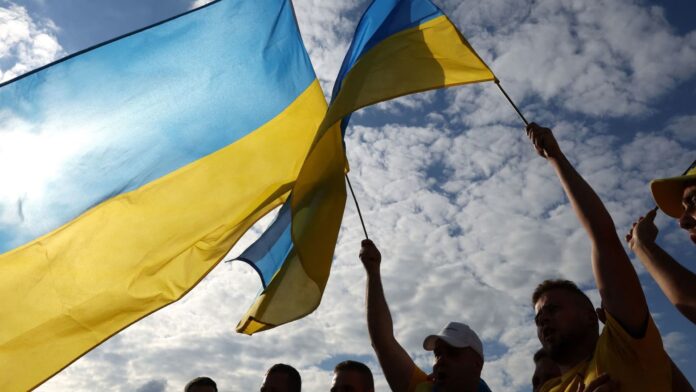 By the time the Russians invaded, 43-year-old Mufti Said Ismahilov — one of the Muslim spiritual leaders of Ukraine — had already resolved that he would step aside from his religious duties to fight for his country.

At the end of last year, as warnings of an imminent attack grew louder, Ismahilov began training with a local territorial defense battalion. By then he had served as a mufti for 13 years.

Born and raised in Donetsk in eastern Ukraine, Ismahilov had already fled Russia once before, in 2014, when Moscow-backed separatists captured his city. He eventually moved to a quiet suburb outside Kyiv called Bucha — only to find himself, eight years later, at the heart of Moscow’s assault on Kyiv, and the site of atrocities that shocked the world. It felt as if the threat of Russian occupation would never end.

“This time I made the decision that I would not run away, I would not flee but I would fight” he said in an interview with The Associated Press in Kostiantynivka, a town close to the front lines in eastern Ukraine where a battle for control of the region is intensifying.

Ismahilov began working as a military driver for paramedics evacuating the wounded from front lines or besieged towns. Tasked with driving in highly dangerous conditions, but also emotionally supporting the critically injured, Ismahilov says he sees his new job as “a continuation of my spiritual duty before God.”

“If you are not scared and you can do this, then it is very important. The Prophet was himself a warrior,” Ismahilov says. “So I follow his example and I also will not run, or hide. I will not turn my back on others.”

Ismahilov was one of the dozens of Ukrainian Muslims who gathered at the mosque in Kostiantynivka Saturday to mark Eid al-Adha — an important religious holiday in Islam. The mosque is now the last remaining operational mosque in Ukrainian-controlled territory in Donbas. Ismahilov told the AP that there are around 30 mosques in the region in total but that most are now in the hands of the Russians.

Last week, Russia captured the city of Lysychansk, the last major stronghold of Ukrainian resistance in the eastern province of Luhansk. The governor of the Luhansk region said on Saturday that Russian forces are now pressing toward the border with the neighboring Donetsk region.

Muslims make up almost 1 percent of the population in Ukraine, which is predominantly Orthodox Christian. There is a large Muslim population in Crimea — home to the Crimean Tatars and illegally annexed by Russian in 2014. Numbers there jump to 12%. There is also a sizeable Muslim community in eastern Ukraine, the result of waves of economic migration as the region industrialized and many Muslims immigrated to the Donbas region to work in the mines and factories.

The conflict in 2014 forced many Muslims from Crimea and Donbas to relocate to other parts of the country where they joined long-established Tatar communities or built new Islamic centers alongside Turks, Arabs and Ukrainian converts.

But the invasion has forced many to flee once again. The mosque in Kostiantynivka used to cater for a local Muslim population of several hundred people. On Saturday, few local residents were present, having journeyed west with their families. Instead, the congregation was made up of soldiers or combat medics from different units: Crimean Tatars and Ukrainian converts from Kharkiv, Kyiv and western Ukraine.

In his sermon following the traditional Eid prayers, Ismahilov told the congregation that this year’s Eid had a symbolic significance in the midst of the war, and asked them to remember Muslims living in occupied territories, where many have lost their homes and several mosques have been destroyed by shelling. Referencing a series of arrests of Crimean Tartars in the wake of the 2014 annexation, Ismahilov said Muslims in occupied territories do not feel safe.

“There is a lot of fear. … The war continues and we have no idea what is happening in the occupied territories and what situation Muslims are in there” he said.

“They are committing sins and … they have come as murderers and occupiers, on a territory that is the home of Ukrainians and Ukrainian Muslims, without any justification. Allah did not give them that right” says Ismahilov. “They will answer for all this before God.”

Olha Bashei, 45, a lawyer turned paramedic from Kyiv who converted to Islam in 2015, says Russia is trying “erase Ukraine from the face of the earth.” Bashei began working as a frontline paramedic in Donbas in 2014. She considers this war her ‘jihad,’ a term to denote a holy war or personal struggle in Islam.

“This war is my war, and I defend my jihad because I have nephews, I have a mother and I defend my home. I do not want my nephews to ever see what I, unfortunately, saw in this war” she said.

“Islam even helps me because in Islam, in prayer, you somehow distract yourself from the war because you read the prayer and you have a connection with the Almighty. For me, Islam is a force that supports me even in war.”

As the soldiers prepared the customary sacrificial sheep for the Eid feast, a residential area in Kostiantynivka several kilometers away came under violent shelling. The incoming artillery shook the ground. Some soldiers ran to the mosque’s bunker. Others shrugged it off and continued to drink their tea and eat dates. The shelling caused several fires, injuring several inhabitants and burning roofs to cinders.

Ismahilov said they would pray for victory and the liberation of the occupied territories.

“We pray that our Muslim compatriots will be safe, that our families will be reunited, that the slain Muslims will go to heaven, and that all the Muslim soldiers who are defending their country will be accepted as shahids (martyrs) by Allah.”

Netflix experiments with Knives Out sequel, but sticks with limited theater runs