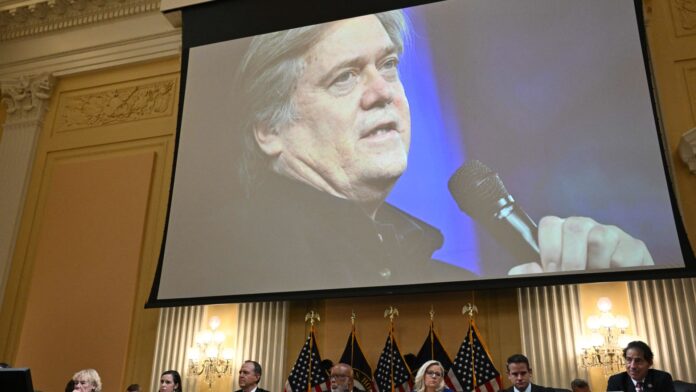 Former White House Chief Strategist Stephen Bannon, appears on screen during the fourth hearing by the House Select Committee to Investigate the January 6th Attack on the US Capitol in the Cannon House Office Building on June 21, 2022 in Washington, DC.

Steve Bannon told the House committee that’s investigating the Jan. 6 insurrection that he is willing to testify, preferably at a public hearing.

Bannon, a one-time advisor to former President Donald Trump, had been set to go on trial next week on criminal contempt charges for refusing to cooperate with the congressional probe of the Capitol riot.

Bannon’s lawyer argued at the time that he was adhering to the assertion of executive privilege that had been claimed by Trump, which allegedly barred Bannon from providing the materials requested by the select committee.

“When you first received the Subpoena to testify and provide documents, I invoked Executive Privilege. However, I watched how unfairly you and others have been treated, having to spend vast amounts of money on legal fees, and all of the trauma you must be going through for the love of your Country, and out of respect for the Office of the President,” Trump wrote in the letter.

“Therefore, if you reach an agreement on a time and place for your testimony, I will waive Executive Privilege for you, which allows you to go in and testify truthfully and fairly,” Trump added.

Representatives for Bannon sent the letter along with their own follow-up to the Jan. 6 committee.

“While Mr. Bannon has been steadfast in his convictions, circumstances have now changed,” Bannon’s lawyer Bob Costello said in a letter. “Mr. Bannon is willing to, and indeed prefers, to testify at your public hearing.”

It’s unclear how his impending trial would be affected if Bannon ends up testifying before the committee. Bannon, who has pleaded not guilty to two counts of contempt of Congress, faces a maximum sentence of one year in jail and a fine of up to $100,000 for each count if convicted.

A spokesperson for the committee did not immediately respond to CNBC’s request for comment. Bannon lawyer Costello declined to comment further than confirming the letters.