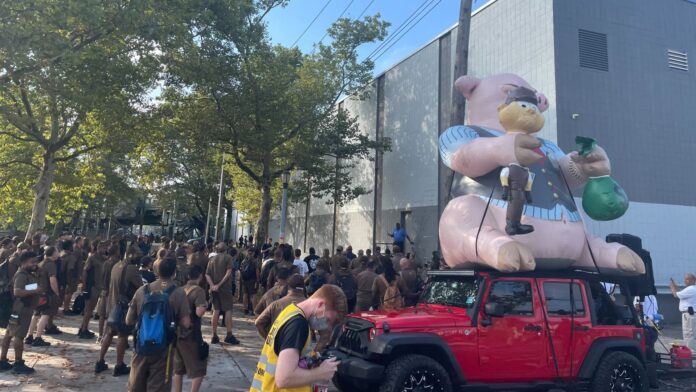 Union leaders at the rally described UPS distribution centers “infernos” with limited air conditioning. The rally was inspired by the June death of 24-year-old Esteban Chavez, a UPS driver who collapsed while working a 90-degree day in Pasadena, California. The event concluded with a moment of silence for Chavez.

UPS responded by saying the health and safety of its workers are the company’s top priority. “UPS drivers are trained to work outdoors and to manage the effects of hot weather,” a company spokesperson told CNBC.

Much of the United States has suffered through extraordinarily high and, in some cases, record-breaking temperatures of late. New York City has seen consistent temperatures in excess of 90 degrees. The city reported a heat-related death last week.

Teamsters Local 804, representing 8,000 workers in the metro New York area, gathered outside the UPS Customer Center in Brooklyn next to an inflatable “fat cat” holding a bag of money and delivery worker by the neck.

UPS employs more Teamsters than any other company. The national union contract is set to expire July 31, 2023, and Local 804 union leaders Thursday warned of a possible strike.

“They’re projected, off of your backs, you brothers and sisters, to have revenue of over $100 billion in 2022,” Perrone told the crowd of delivery drivers and warehouse workers.

Perrone, who was a UPS driver for over 25 years, said that he had sought medical attention on three separate occasions throughout his career. Perrone has been the Local 804 president for three and a half years.

“I had four drivers just last week on Thursday and Friday that had to go to the emergency room because of the heat,” Perrone told CNBC during the rally. In one case, he said, management didn’t call an ambulance.

“These buildings are infernos inside,” he said. “The only things that are air conditioned are the management’s offices and where they keep their electronics.”

Local 804 Vice President Christopher Williamson said the management cuts off air conditioning in the warehouses at 6 p.m. and challenged the company’s CEO, Carol Tome, to spend a night in a warehouse.

Williamson told CNBC that his warehouse has been awaiting parts to fix an ice machine. He asked, “How are you waiting for parts when you’re UPS and you have next day air delivery?”

UPS said it spends $270 million each year on safety programs, including for working in hot weather.

“Preparation, rest, hydration and maintaining good health practices are key to working outdoors,” a spokesperson said. UPS has a “Cool Solutions” program that educations “employees about hydration, along with nutrition and proper sleep before working in hotter temperatures,” the representative added.

“It’s the same struggle,” Daniels said. “Specifically with the working conditions: the poor ventilation and the no AC, we can really relate as Amazon warehouse workers.”

Intuit and Box are buys as they are best positioned to weather a downturn, Citi says

Amazon investigated by UK watchdog over its marketplace practices

2022 downturn is testing active ETFs. Find out if yours should be held