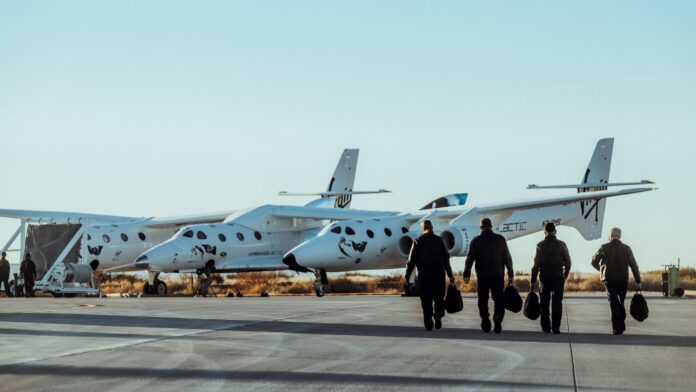 Virgin Galactic on Thursday reported a wider third-quarter loss from a year ago, with CEO Michael Colglazier outlining the remaining steps before the space tourism company aims to launch its long-delayed service next year.

“As we approach commercial service, we recognize the significance of getting back to the business of spaceflight,” Colglazier said on a conference call.

The company said it is nearly done with a lengthy period of downtime to refurbish and upgrade its vehicles. Colglazier said work on spacecraft VSS Unity is finished, while work on carrier aircraft VMS Eve is set to be completed before the end of December.

Virgin Galactic will then move to a series of test flights in the first quarter, which Colglazier said will begin with a VMS Eve test flight in early January. Then the company will conduct a “glide flight” test with both VMS Eve and VSS Unity, before moving to a test spaceflight with a Virgin Galactic mission specialist.

Commercial service will be marked by the launch of a previously announced flight carrying members of the Italian Air Force, planned for the second quarter, before moving to further flights of private customers. The company has about 800 customers in its backlog.

Shares of Virgin Galactic are down 66% this year as of Thursday’s close of $4.58.

For the quarter, the company reported an adjusted EBITDA loss of $129 million, compared to a loss of $68 million a year ago, with negligible revenue. The company has about $1.1 billion in cash on hand, and completed an “at the market” common stock offering that raised $100 million.

Virgin Galactic is emphasizing the potential of its “Delta-class” series of spacecraft, with work set to begin next year. But Colglazier noted that, since the company is prioritizing its resources on launching commercial service and building Delta-class spacecraft, that “will likely impact the pace of work on our second spaceship VSS Imagine,” which was supposed to bolster Virgin Galactic’s near-term capabilities.

“We are reassessing its schedule for entering commercial service,” Colglazier said.

The world ‘is at the dawn of a new industrial age,’ IEA says

Flu hospitalization rate highest in a decade, kids and seniors most at risk