HomeBusinessWalmart strategy to launch apparel, home brands is being put to the...
Business

Walmart strategy to launch apparel, home brands is being put to the test 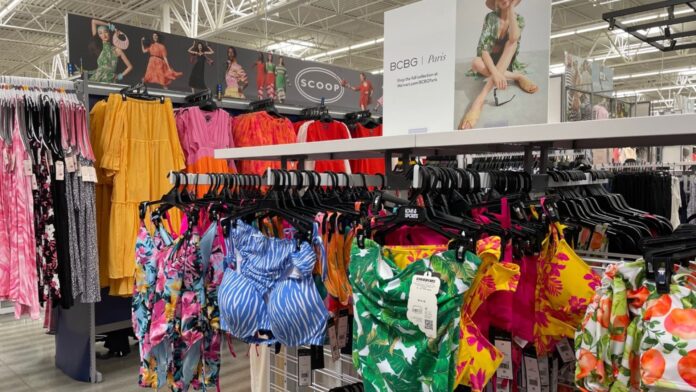 Scoop is one of Walmart’s exclusive fashion brands. It has also struck deals with national brands like BCBG Paris.

Walmart‘s redesigned SuperCenter, located just 16 miles from its Northwest Arkansas headquarters, reflects the retailer’s ambitions to get more customers to turn to its stores and website to fill their closets and living rooms, along with their fridges.

It is the retailer’s new model, and it will soon spread across the country. Walmart plans to open 30 more redesigned stores by late January and and hundreds more in the following fiscal year, Chief Merchandising Officer Charles Redfield said.

He said the locations will vary slightly and will have different elements of the pilot store. They’ll be used to test and learn before Walmart rolls out the look more widely, he said.

Walmart is the nation’s largest grocery by revenue, but it wants to drive more sales of higher-margin items such as apparel. Over the past five years, the retailer has launched new brands and struck partnerships with companies like Reebok, Gap and Justice to expand its offerings in apparel, home and other discretionary categories. Those brands have often come with a higher price point and a focus on style. Many are expanding to more of Walmart’s big-box stores.

The retailer’s strategy has taken on more urgency, after Walmart’s first quarter earnings disappointed Wall Street last month and cut profit expectations. Walmart’s mix of merchandise in the period contributed to its earnings miss. As customers spent more on groceries and gas because of inflation, some decided to not buy other, more-profitable items like clothing and TVs — the very purchases that tend to lift profits.

A pullback on discretionary spending is hitting retailers in general, especially as the companies lap a year-ago period when shoppers had extra dollars from stimulus checks. For Walmart, sales of general merchandise in the U.S. slipped in the first quarter, drawing fewer dollars than the year-ago period even as overall U.S. net sales rose to $96.9 billion, according to Walmart’s filings.

To compound troubles, retailers — including Target, Kohl’s and American Eagle Outfitters — have racked up excess inventory, as consumers snub some popular pandemic items, watch the budget and decide to spend on travel or dining out instead of goods.

Walmart reported that it had excess merchandise, too, with inventory levels up about 33% versus a year earlier. U.S. CEO, John Furner, said last week at an investor day that it will take “a couple of quarters” to get back to where the retailer wants to be. He estimated that about 20% of that overage is merchandise that the company would like to “just wish away.” The company declined to comment further on its strategy to sell through its merchandise, after Target shared its aggressive inventory plans.

There’s a big opportunity for Walmart if it can use the frequency of grocery shopping at stores and popularity of online options like curbside pickup to lift general merchandise sales, said Robby Ohmes, a retail analyst for Bank of America.

Plus, he said, creeping prices may encourage a new or infrequent Walmart shopper to give the discounter a shot.

“Everybody is sort of managing inflation,” Ohmes said. “There are going to be groups of people who find themselves at Walmart who normally wouldn’t — so they may get a better flow of customers as people become more value-conscious.”

Walmart is expanding the price points in its beauty department. It recently added a “Beauty finds” display with makeup, skincare, hair and other items for $3, $5 or $9 each. It also sells prestige brands through a new deal with British beauty retailer SpaceNK.

The lure of lower prices

On its website and in a growing number of its stores, Walmart has expanded its styles and price points. Along with cheap basics, it sells sundresses and tops from exclusive brands, Scoop and Free Assembly, which customers could pack for vacation or wear to a party. It carries jeans a customer could wear out to dinner from Sofia Jeans, an exclusive brand developed with actress Sofia Vergara.

And in home, Walmart is selling more aspirational styles, too — including a collection developed with Clea Shearer and Joanna Teplin, the stars behind Netflix’s “The Home Edit.”

In Walmart’s redesigned store in Arkansas, a display shows Thyme & True, one of the retailer’s exclusive home brands. Shoppers can scan a QR code to learn more about the items or order them online.

At an investor day earlier this month, he and other Walmart executives stressed that the retailer will continue to offer entry-level price points for customers who live on a tight budget. It will have those low prices not only on key food items like rice, cans of tuna and macaroni and cheese, but also on general merchandise like T-shirts and tennis balls.

But it can also draw in customers who have more money to spend, McMillon said.

“As you move up the income scale, how many of those customers can you attract in the areas you might not have been doing business with them as frequently?” he said. “Can we move some volume into apparel and home and maybe even some of the consumable categories as people become even more value-conscious?”

Walmart attracted consumers for basics and groceries, but was losing them when they shopped for other items, Redfield said.

“They were having to go somewhere else to get what they want from a style and quality standpoint, so we said, ‘We’ve got to fix that,'” he said in an interview.

Walmart has launched exclusive apparel brands, including active and swimwear line Love & Sports, to nudge customers to buy more general merchandise. Those brands are front and center at a new store in Springdale, Ark., which is near Walmart’s headquarters.

Inside of the redesigned store in Northwest Arkansas, the clothing department has fewer racks and wider aisles to encourage browsing. It has dedicated areas that resemble mini shops for national brands, such as Reebok and kids clothing brand Justice. And it puts Walmart’s own fashion and home brands front and center with mannequins and displays that suggest how to put together an outfit or a room.

One of the other big changes? Price signs are smaller near the national apparel brands and Walmart’s elevated clothing brands — a big break from the retailer’s tendency to make the numbers big and bold.

“We’re selling apparel in a grocery store, however that doesn’t mean we have to sell apparel like it’s grocery,” said Alvis Washington, Walmart’s vice president of marketing, store design, innovation and experience. “Apparel is a discretionary category. It’s emotional. You want them to fall in love with the fashion.”

“This is where you actually want them to look, feel, touch the item and then validate the choice by looking at the price point on it,” Washington said. “We’re letting the product be hero and setting the tone.”

Even in the grocery department, the store has a different look. The wine aisle is larger and includes expensive red wines and top-shelf champagnes. The craft beer section is also prominent. Both changes are geared toward a more trendy millennial customer, Redfield said.

A.I.-powered drug hunters are nearing a pivotal stage in their development

This $3.8 billion hedge fund is shaking up the industry with its pay-for-performance model