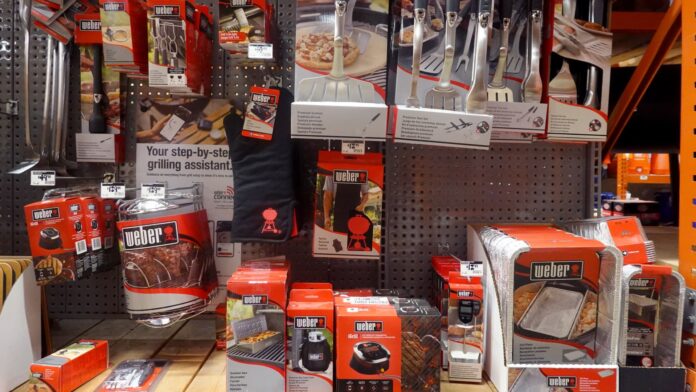 Weber Grill accessories are offered for sale at a home improvement store on July 23, 2021 in Palatine, Ill.

Weber shares tumbled 20% in morning trading Monday after the grill maker abruptly said CEO Chris Scherzinger is departing amid waning demand for its products in stores and online.

The Palatine, Illinois-based company also suspended its quarterly cash dividend and said it is committed to working with lending partners to remain in compliance with its credit facilities.

Weber named Chief Technology Officer Alan Matula as its interim CEO, effective immediately, as it searches for a permanent replacement.

Weber said the headwinds are expected to persist into its fiscal fourth quarter and withdrew its fiscal 2022 forecast due to the market uncertainty.

The company said it is considering layoffs and other ways to reduce expenses, including by tightening its inventories. It said it will provide additional details when it reports its fiscal third-quarter results on Aug. 15.

Weber, which makes smokers, barbecue grills and other accessories for outdoor cooking enthusiasts, went public last year as families spent more time cooking and entertaining at home during the pandemic. More recently, though, demand for its cooking products has cooled as consumers rethink spending amid inflation and the looming possibility of a recession.

In the quarter ended March 31, Weber’s net sales fell 7% and its net loss came in at $51 million, compared with net income in the year-ago period.

Scherzinger joins a growing list of CEOs that have departed retail companies in recent months, from Gap to Game Stop, as boards grow displeased with sluggish performance, and supply chain disruptions and other challenges persist.

Weber shares are down about 42% year to date, as of Friday’s market close.