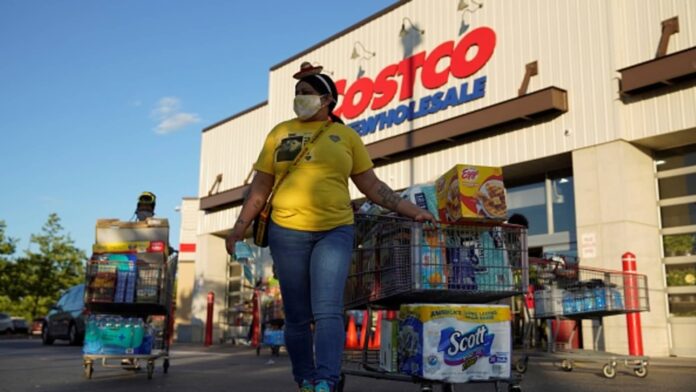 Wells Fargo downgraded Club holding Costco (COST) in a rare move Monday, citing “brewing headwinds” to the wholesale retailer’s growth momentum. We think this call is a mistake and see Costco as a buy here, given the value it continues to offer its customer base amid a deteriorating economy. Analysts at Wells Fargo said their downgrade to the equivalent of neutral from buy was based on growing evidence of slowing food price inflation — which had benefited Costco given its competitive offerings — along with softer fuel traffic comparisons and overall weaker consumer demand. “Costco remains a high quality name, but we see a number of hurdles in the path of this rich multiple stock moving forward,” the analysts wrote in a note. Wells Fargo also lowered its price target for Costco to $490 a share from $600 a share. The Club took issue with the downgrade of such a solidly recession-resistant retailer. “It does have a rich premium, but this is one of the most dependable companies in any type of economic climate ,” Jeff Marks, director of portfolio analysis at the Investing Club, said Monday. Costco’s stock slid around 1% in early trading before edging up Monday afternoon to close at $488.55 a share. The stock has fallen 15% this year, but continues to outperform the broader market, with the S & P 500 down roughly 21% year-to-date. Wells Fargo’s take Costco saw heightened consumer demand last year due to tailwinds from Covid-19, as consumers spent more time at home and stocked up on household essentials. But this year, as life has returned to some level of normalcy for many Americans, Costco’s membership-only retail business could see sales come under pressure if demand is softer, Wells Fargo said. “It does appear that COST’s traffic has moderated recently. We have become increasingly concerned about how staples retail stocks react to slowing top-line momentum, and COST may have more exposure to this issue given its relatively high multiple,” the analysts wrote. Wells Fargo also cited expected easing in fuel margins at the retailer, which sells gasoline, and potential currency headwinds. But Wells Fargo’s take on Costco is hardly unanimous on Wall Street. Analysts at Stifel last week said they continue to see Costco as a “best-in-class retailer” and a “core holding for large-cap consumer investors.” That research note came on the heels of Costco releasing sales data for October, which showed an uptick of 6.7% but came in behind September’s sales growth of 8.6%. Despite the month-over-month slowdown, Stifel analysts found that Costco’s 2-year compound annual growth rate (CAGR) for same store sales in October accelerated for the fourth consecutive month. The Club take We think Wells Fargo’s analysis on Costco underappreciates the full value of its business model and does not change our view that Costco is a market leader in the retail space. It’s important to understand how Costco runs its business because that’s where it drives an unparalleled value proposition to its customers. Costco focuses on increasing membership at its global warehouses, where it derives most of its revenue. The wholesale retailer has been able to maintain strong membership renewal rates because it can pass along vendor discounts to members that it receives from the high volume of foods it buys. Furthermore, we see the possibility of a special dividend, last distributed in November 2020, as a catalyst that could boost the stock. This dividend has been paid out to investors four times within the past eight years. Additionally, management could raise membership fees in 2023, further supporting top line growth. While shares of Costco are valued at a premium, we think it’s justified given the company’s steady earnings growth. As we’ve said before, Costco is the best retailer to own in a challenging economy, and we believe it can continue to outperform its competitors as consumers search for cost-saving deals. (Jim Cramer’s Charitable Trust is long COST. See here for a full list of the stocks.) As a subscriber to the CNBC Investing Club with Jim Cramer, you will receive a trade alert before Jim makes a trade. Jim waits 45 minutes after sending a trade alert before buying or selling a stock in his charitable trust’s portfolio. If Jim has talked about a stock on CNBC TV, he waits 72 hours after issuing the trade alert before executing the trade. THE ABOVE INVESTING CLUB INFORMATION IS SUBJECT TO OUR TERMS AND CONDITIONS AND PRIVACY POLICY , TOGETHER WITH OUR DISCLAIMER . NO FIDUCIARY OBLIGATION OR DUTY EXISTS, OR IS CREATED, BY VIRTUE OF YOUR RECEIPT OF ANY INFORMATION PROVIDED IN CONNECTION WITH THE INVESTING CLUB. NO SPECIFIC OUTCOME OR PROFIT IS GUARANTEED.

Customers carry their items after shopping at Costco in Washington D.C., May 5, 2021.

Wells Fargo downgraded Club holding Costco (COST) in a rare move Monday, citing “brewing headwinds” to the wholesale retailer’s growth momentum. We think this call is a mistake and see Costco as a buy here, given the value it continues to offer its customer base amid a deteriorating economy.

Rates raised by three-quarters of a percentage point