HomeInvestingWeWork can more than double as it leads flexible office industry, Credit...
Investing 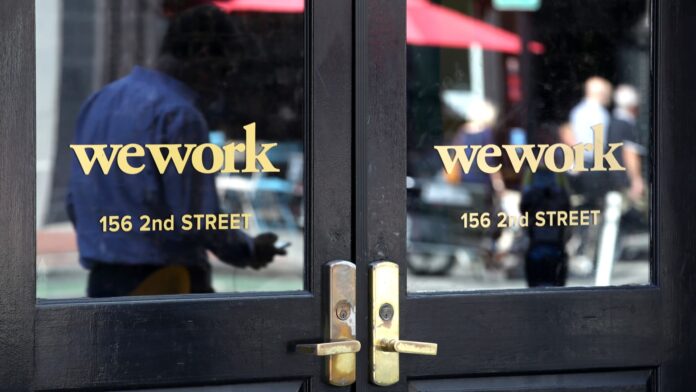 Credit Suisse initiated coverage of the office-sharing company WeWork with a bullish call. The firm on Wednesday gave WeWork an outperform rating and set a price target of $11 on the stock, which is more than double where the stock closed Wednesday. “We believe WeWork is well positioned to take advantage of the structural demand drivers for the flex office industry, as we view Work From Home as a long-tailed overhang to demand for traditional office space,” Credit Suisse analyst Tayo Okusanya said in a note Thursday. WeWork has undergone a massive $2.6 billion corporate restructuring after the blowup of its IPO attempt in 2019 that led to the eviction of its then-CEO. Still, “WeWork 2.0 should work,” Okusanya said, adding that the company maintains its first-mover advantage and global scale, which is a big plus for the stock. “Attractive total addressable market, market share gains, new product introduction, and improved focus on the bottom line should pave the way for positive Free Cash Flow by 2023, an improved capital structure, and better cost of capital,” he said. He added that analysts expect free cash flow to turn positive in the third quarter of next year and accelerate in 2024, as the company’s growth strategy pivots from “capex intensive traditional leases to asset-light deals (revenue share/management), which require significantly less or no capex.” —CNBC’s Michael Bloom contributed reporting.

Share
Facebook
Twitter
Pinterest
WhatsApp
Previous article
How to save money on gas, with or without a federal gas tax holiday
Next article
The race to make green hydrogen competitive is on
RELATED ARTICLES
Investing