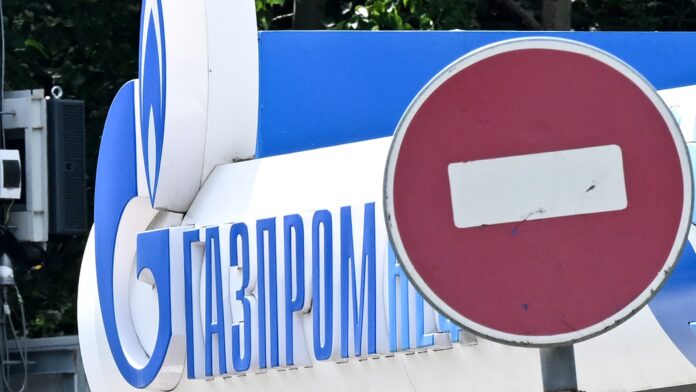 A view of damage after market place hit by Russian attacks as Russia-Ukraine War continues in Bakhmut, Donetsk Oblast, Ukraine on July 25, 2022.

Russia’s assault on Ukraine has taken a significant toll on the country’s economy, according to a top aide to Ukraine President Volodymyr Zelenskyy.

“Currently, we are expecting that the Ukrainian economy is going to show a decline on the level of around 35% to 40%, which is a huge decline,” Oleg Ustenko, economic advisor to Zelenskyy, told CNBC’s “Capital Connection.”

“But why this decline has happened [is] because I would say 50%, half of our businesses, are not operational now or not able to operate at full capacity.”

“When the economy is declining, then the budget revenues are decreased. Again the reason for that is the Russian invasion,” he added.

“We have a serious situation. It is time for everyone to understand that,” Habeck told the ARD broadcaster Monday evening, adding that Germany must reduce its gas consumption. “We’re working on that,” Habeck said.

Habeck said gas supplies for industry will be reduced before private residences or critical infrastructure such as hospitals experience gas shortages.

“Of course it’s a big concern, which I also share, that this can happen. Then certain production chains in Germany or Europe would simply no longer be manufactured. We have to avoid that with all the strength we have.” The way is to bring gas consumption down by 15%-20% in Germany, he said.

“If we can do that, then with all the measures we have taken, we have a very good chance of not having to take this step.”

That means that the flow of gas, already at just 40% of capacity, will fall by another half from tomorrow.

Gazprom said this was in order to make repairs to a turbine, but that claim has been slammed by Western officials. Germany’s Habeck said that reasoning was a “farce,” while Ukraine’s President Zelenskyy said Putin was continuing his “gas war” against Europe, a continent that has traditionally been reliant on Russia for around 45% of its annual gas supplies.

Britain’s Ministry of Defense has said that, contrary to Russia’s claims, there is “no indication” that a missile attack on Odesa’s port last weekend actually hit a Ukrainian warship and a stockpile of anti-ship missiles.

“On 24 July 2022, Russian cruise missiles hit the dock-side in Ukraine’s Odesa Port. The Russian MoD claimed to have hit a Ukrainian warship and a stockpile of anti-ship missiles. There is no indication that such targets were at the location the missiles hit,” the ministry said.

The comments come after Russia claimed that it had used high-precision Kalibr missiles to destroy a ship repair plant in Odesa, destroying a warship in the dock and a depot of U.S.-supplied Harpoon missiles. The strike incapacitated the plant’s production capacities for the repair and upgrade of the Ukrainian Navy’s ships, a Russian general said. Ukraine’s President Volodymyr Zelenskyy called the attack an act of “barbarism.”

In its latest intelligence update, the U.K. noted that “Russia almost certainly perceives anti-ship missiles as a key threat which is limiting the effectiveness of their Black Sea Fleet.”

“This has significantly undermined the overall invasion plan, as Russia cannot realistically attempt an amphibious assault to seize Odesa. Russia will continue to prioritise efforts to degrade and destroy Ukraine’s anti-ship capability. However, Russia’s targeting processes are highly likely routinely undermined by dated intelligence, poor planning, and a top-down approach to operations,” it added.

“Again, the night shelling of the city. One of Kharkiv’s areas, which is closer to the city center was hit. Traditionally, it was next to a building that had nothing to do with military infrastructure,” Terekhov said, adding it was still unknown whether there were any casualties after the strikes.

In its latest military update on Tuesday, the general staff of Ukraine’s armed forces said Kharkiv and surrounding areas had come under attack from tanks, barrel and rocket artillery while Russian forces continued their assaults on the Donetsk region of Donbas, with Kramatorsk, Sloviansk and Bakhmut and surrounding settlements coming under fire.

A damaged marketplace in Bakhmut, Donetsk Oblast, on July 25, 2022.

Nearby, Russia was also “concentrating its main efforts on trying to improve the tactical position and creating conditions for an offensive on the cities of Siversk and Soledar. Enemy units replenish stocks of ammunition and fuel and oil,” a spokesperson for Ukraine’s general staff said on Facebook.

A Russian serviceman patrols the territory of the Zaporizhzhia Nuclear Power Station in Energodar on May 1, 2022. The Zaporizhzhia Nuclear Power Station, seized by Russian forces in March, is in southeastern Ukraine and is the largest nuclear power plant in Europe and among the 10 largest in the world. This picture was taken during a media trip organised by the Russian army.

The president of a Ukrainian nuclear power plant company said Russian forces kidnapped about 100 of its employees.

Kotin added that Russian troops took ID badges and entered a secure area within the nuclear power plant. He said “what they did there is not known.”

He said they may not have followed proper security controls and “it is quite possible that they got radioactive contamination on their clothes out of the control zone.”

Putin is waging a ‘gas war’ against Europe, Zelenskyy says

“Russia is not going to resume gas supplies to European countries, as it is contractually obligated to do. And this is an open gas war, which Russia is waging against a united Europe,” Zelenskyy said during a nightly address on the Telegram messaging app.

“They don’t care what will happen to the people, how they will suffer from hunger due to the blocking of ports or from winter cold and poverty,” Zelenskyy said, adding that Russia is engaging in “different forms of terror.”

He also called on global leaders to sever trade ties with Russia “as much as possible” in order to pressure Moscow.

Russia’s Gazprom said it would further reduce natural gas flows through a major pipeline to Europe to 20% of capacity, citing repairs of equipment.

The Russian state-owned company tweeted that it would reduce “the daily throughput” of the Nord Stream 1 pipeline to Germany to 33 million cubic meters as of Wednesday. The head of Germany’s network regulator confirmed the reduction.

The move comes after Gazprom raised questions about the return of a part that has been at the center of tensions over natural gas deliveries through the pipeline, saying that it isn’t satisfied with documents it has received.

The company reduced the gas flow through the Nord Stream 1 pipeline by 60% in mid-June, citing alleged technical problems involving the equipment that partner Siemens Energy sent to Canada for overhaul and couldn’t be returned because of sanctions over Russia’s invasion of Ukraine.

Germany has rejected Gazprom’s technical explanation for the gas reduction, saying repeatedly that it was only a pretext for the Kremlin’s political decision to sow uncertainty and further push up energy prices.

Farmers harvest a wheat field near Melitopol in Ukraine amid Russia’s onsluaght.

Despite a Russian missile strike on a Ukrainian port over the weekend, Ukraine will start to export grains and other food products Tuesday, the country’s deputy infrastructure minister said.

“Within the next day, we will be ready to work on the restoration of the export of agricultural products through our ports,” Yuriy Vaskov told reporters on Monday, according to an NBC News translation.

Vaskov said that Chornomorsk will be the first port to reopen, followed by Odesa and Pivdennyi. Vaskov added that in the next two weeks, all ports will be exporting agricultural products on a consistent basis.