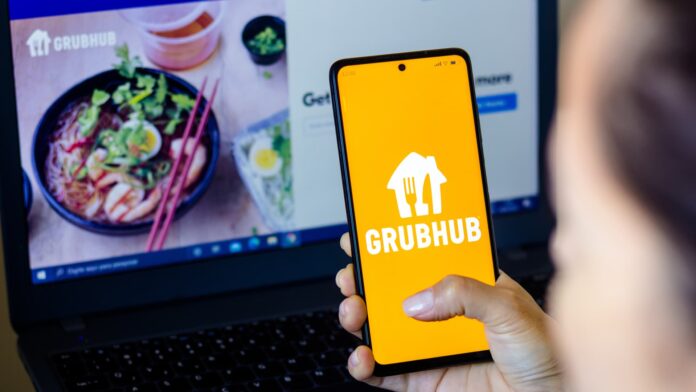 Amazon’s latest partnership with Grubhub will have little impact on the company’s stock but could signal a growing appetite to compete in restaurant delivery, analysts say. The technology company announced last week it’s partnering with the delivery platform to offer Prime users a free year membership to Grubhub+. As part of the deal, Amazon will take a 2% stake in the company with the option to increase it to 15%. “If it stops and starts with giving plus away for a year then I would say the competition is manageable,” said Bernie McTernan, an analyst at Needham. “This is the first step in Amazon getting deep into the restaurant delivery marketplace, but we still don’t know exactly what the end-game is here.” For Amazon, the stakes are low. The partnership is a risk-free way to continue adding value to its robust membership program with minimal capital, said Tom Forte, an analyst at D.A. Davidson. And, as a potential slowdown in consumer spending looms, it’s another way the company can expand its offering as it looks to retain subscribers, wrote Morgan Stanley’s Brian Nowak in a note last week. A return to restaurant delivery Restaurant delivery is no new initiative for Amazon. The company dipped its toes into the market in 2015, when it offered a restaurant delivery service in Seattle and over 20 other U.S. cities to Prime members . That effort was shuttered in 2019 . “One difference this time is that AMZN Prime members will now have access to a more scaled restaurant supply base than with AMZN’s prior restaurant offering,” Nowak said. Morgan Stanley estimates 320,000 restaurants use the Grubhub platform in North America. While the partnership may have little impact on Amazon, the pressure hangs on Grubhub. Success would mean a slew of new customers following the trial period. Plus, it’s an opportunity to lure those struggling to choose a delivery subscription to purchase, McTernan said. Covid-19 ushered in a new era for delivery as demand boomed while consumers sheltered at home. But certain delivery companies have outpaced their peers. Grubhub’s parent-company Just Eat Takeaway.com said in April it was exploring a sale of the delivery company , which it purchased for $7.3 billion in 2021. What it means for the competition Shares of both Uber and DoorDash slipped in trading following the Amazon announcement, but it is too soon to tell what aftershocks the partnership will have on the delivery market, said Tom White, an analyst at D.A. Davidson. How it impacts the sector also hinges on how aggressive both companies push and market the service. “While we acknowledge this increases competition for new diners, it will ultimately depend on placement and email marketing from Amazon and we question the visibility this will receive,” wrote Andrew Boone, an analyst at JMP Securities in a note last week. Grubhub’s offering, with access to millions of Prime subscribers, may offer the company a leg up to DoorDash’s loyalty program, wrote Bank of America’s Michael McGovern last week. However, DoorDash “maintains competitive advantages in restaurant selection, logistics speed, and non-restaurant categories that will continue to generate share gains despite elevated competition for customers,” he said. The partnership could force other delivery services or companies to beef up their offerings or add services down the road, said Joseph Feldman, an analyst at Telsey Advisory Group. Still, many platforms have long offered their own exclusive programs, he said, pointing to American Express , which offers monthly Uber cash to certain cardholders, as an example. Amazon’s play could incentivize companies that refrain from using third-party delivery — like Domino’s Pizza — to jump on delivery platforms or force companies with exclusive agreements to expand their offerings, wrote Citi’s Jon Tower. While the move may signify an appetite for restaurant delivery, any Amazon plans to acquire Grubhub in the future would likely face regulatory pressure, White said. The real test for Grubhub will be whether Prime customers stick around after the promotional period ends, McTernan said. He added that there are risks ahead given that the economy looks to be entering a period of slowing consumer spending.

How to know the economy is in a slump