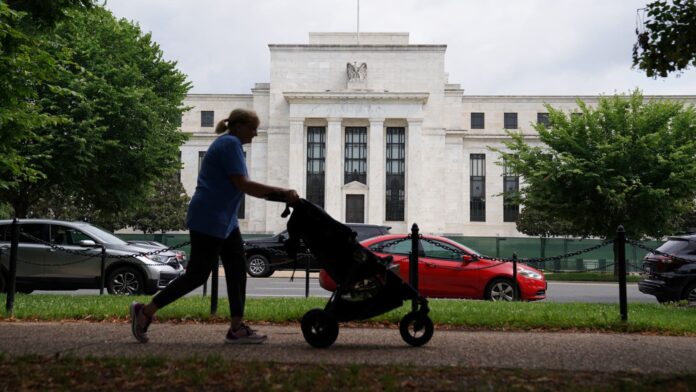 The Federal Reserve raised the target federal funds rate by 0.75 percentage point for the fourth time in a row on Wednesday, marking an unprecedented pace of rate hikes.

The U.S. central bank has raised the benchmark short-term borrowing rate a total of six times this year, including 75 basis point increases in June, July and September, in an effort to cool down inflation, which is still near 40-year highs and causing most consumers to feel increasingly cash strapped. A basis point is equal to 0.01 of a percentage point.

A policy statement after the announcement noted that the Fed is considering the “cumulative” impact of its hikes so far when determining future rate increases. Economists are hoping this signals plans to “step-down” the pace of increases going forward, which could mean a half point hike at the December meeting and then a few smaller raises in 2023. Still, stocks tumbled after Federal Reserve Chair Jerome Powell said there were more rate hikes ahead.

“Americans are under greater financial strain, there’s no question,” said Chester Spatt, professor of finance at Carnegie Mellon University’s Tepper School of Business and former chief economist of the Securities and Exchange Commission.

However, “as the Fed tightens, this also has adverse effects on everyday Americans,” he added.

What the federal funds rate means to you

The federal funds rate, which is set by the central bank, is the interest rate at which banks borrow and lend to one another overnight. Although that’s not the rate consumers pay, the Fed’s moves still affect the borrowing and saving rates they see every day.

By raising rates, the Fed makes it costlier to take out a loan, causing people to borrow and spend less, effectively pumping the brakes on the economy and slowing down the pace of price increases.

“Unfortunately, the economy will slow much faster than inflation, so we’ll feel the pain well before we see any gain,” said Greg McBride, Bankrate.com’s chief financial analyst.

Already, “mortgage rates have rocketed to 16-year highs, home equity lines of credit are the highest in 14 years, and car loan rates are at 11-year highs,” he said.

• Mortgage rates are already higher. Even though 15-year and 30-year mortgage rates are fixed and tied to Treasury yields and the economy, anyone shopping for a home has lost considerable purchasing power, in part because of inflation and the Fed’s policy moves.

Along with the central bank’s vow to stay tough on inflation, the average interest rate on the 30-year fixed-rate mortgage hit 7%, up from below 4% back in March.

The increase in mortgage rates since the start of 2022 has the same impact on affordability as a 35% increase in home prices, according to McBride’s analysis. “If you had been approved for a $300,000 mortgage in the beginning of the year, that’s the equivalent of less than $200,000 today.”

For home buyers, “adjustable-rate mortgages may continue to be more popular among consumers seeking lower monthly payments in the short term,” said Michele Raneri, vice president of U.S. research and consulting at TransUnion. “And consumers looking to tap into available home equity may continue to look towards HELOCs,” she added, rather than refinancing.

Yet adjustable-rate mortgages and home equity lines of credit are pegged to the prime rate, so those will also increase. Most ARMs adjust once a year, but a HELOC adjusts right away. Already, the average rate for a HELOC is up to 7.3% from 4.24% earlier in the year.

• Credit card rates are rising. Since most credit cards have a variable rate, there’s a direct connection to the Fed’s benchmark. As the federal funds rate rises, the prime rate does as well, and your credit card rate follows suit within one or two billing cycles.

That means anyone who carries a balance on their credit card will soon have to shell out even more just to cover the interest charges. “This latest interest rate hike will most acutely impact those consumers who do not pay off their credit card balances in full through higher minimum monthly payments,” Raneri said.

Because of this rate hike, consumers with credit card debt will spend an additional $5.1 billion on interest, according to an analysis by WalletHub. Factoring in the rate hikes from March, May, June, July, September and November, credit card users will wind up paying around $25.6 billion more in 2022 than they would have otherwise, WalletHub found.

Already credit card rates are near 19%, up from 16.34% in March. “That’s the highest since the Fed began tracking in 1994 and is more than a full percentage point higher than the previous record set back in 2019,” according to Matt Schulz, chief credit analyst at LendingTree. And rates are only going to continue to rise, he said. “We’ve still got a ways to go before those rates hit their peak.”

The best thing you can do now is pay down high-cost debt — “0% balance transfer credit cards are still widely available, especially for those with good credit, and can help you avoid accruing interest on the transferred balance for up to 21 months,” Schulz said.

“That can be an absolute godsend for folks struggling with card debt,” he added.

• Auto loans are more expensive. Even though auto loans are fixed, payments are getting bigger because the price for all cars is rising along with the interest rates on new loans, so if you are planning to buy a car, you’ll pay more in the months ahead.

The average interest rate on a five-year new car loan is currently 5.63%, up from 3.86% at the beginning of the year and could surpass 6% with the central bank’s next moves, although consumers with higher credit scores may be able to secure better loan terms.

Paying an annual percentage rate of 6% instead of 5% would cost consumers $1,348 more in interest over the course of a $40,000, 72-month car loan, according to data from Edmunds.

If you have a private loan, those loans may be fixed or have a variable rate tied to the Libor, prime or T-bill rates, which means that as the Fed raises rates, borrowers will likely pay more in interest, although how much more will vary by the benchmark.

Currently, average private student loan fixed rates can range from 3.22% to 14.96%, and from 2.52% to 12.99% for variable rates, according to Bankrate. As with auto loans, they vary widely based on your credit score.

Of course, anyone with existing education debt should see where they stand with federal student loan forgiveness.

• Only some savings account rates are higher. The silver lining is that the interest rates on savings accounts are finally higher after several consecutive rate hikes.

While the Fed has no direct influence on deposit rates, they tend to be correlated to changes in the target federal funds rate, and the savings account rates at some of the largest retail banks, which have been near rock bottom during most of the Covid-19 pandemic, are currently up to 0.21%, on average.

Thanks, in part, to lower overhead expenses, top-yielding online savings account rates are as high as 3.5%, according to Bankrate, much higher than the average rate from a traditional, brick-and-mortar bank.

“Savers are seeing the best yields since 2009 — if they’re willing to shop around,” McBride said. Still, because the inflation rate is now higher than all of these rates, any money in savings loses purchasing power over time.

Now is the time to boost that emergency savings, McBride advised. “Not only will you be rewarded with higher rates but also nothing helps you sleep better at night than knowing you have some money tucked away just in case.”

“More broadly, it makes sense to be more cautious,” Spatt added. “Recognize that employment is maybe less secure. It’s reasonable to expect we’ll see unemployment going up, but how much remains to be seen.”

Chinese companies look to U.S. and Asia as growth slows at home