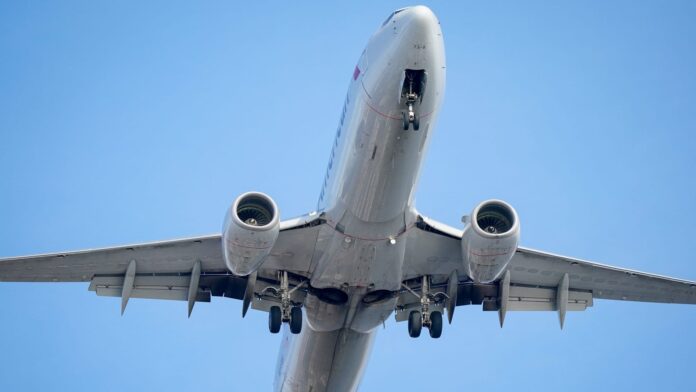 An American Airlines Boeing 737-800, equipped with radar altimeters that may conflict with telecom 5G technology, can be seen flying 500 feet above the ground while on final approach to land at LaGuardia Airport in New York City, New York, U.S., January 6, 2022.

The leaders of the country’s biggest airlines learned a hard lesson this summer: it’s easier to make plans than to keep them.

The three biggest U.S. carriers — Delta, United and American — are dialing back their flight growth ambitions, an effort to fly more reliably after biting off more than they could chew this year as they chased an unprecedented rebound in travel, despite a host of logistical and supply chain constraints as well as staffing shortages.

The cuts come as airlines face elevated costs that they don’t see easing significantly just yet, along with the possibility of an economic slowdown and questions over spending by some of the country’s biggest corporate travelers.

Shares of the big three U.S. carriers tumbled Thursday, while the broader market was higher.

United Airlines estimated it would restore 89% of 2019 capacity levels in the third quarter, and about 90% in the fourth. In 2023, it will grow its schedule to no more than 8% above 2019’s, down from an earlier forecast that it would fly 20% more than it did in 2019, before the Covid-19 pandemic hamstrung travel.

“We’re essentially going to keep flying the same amount that we are today, which is less than we intended to, but not grow the airline until we can see evidence the whole system can support it,” United CEO Scott Kirby said in an interview with CNBC’s “Fast Money” after reporting results Wednesday. “We’re just building more buffer into the system so that we have more opportunity to accommodate those customers.”

American Airlines CEO Robert Isom also spoke of a “buffer” after reporting record revenue on Thursday. That carrier has been more aggressive than Delta and United in restoring capacity but said it would fly 90%-92% of its 2019 capacity in the third quarter.

“We continue to invest in our operation to ensure we meet our reliability goals and deliver for our customers,” Isom wrote in a staff note, discussing the airline’s performance. “As we look to the rest of the year, we have taken proactive steps to build additional buffer into our schedule and will continue to limit capacity to the resources we have and the operating conditions we face.”

Delta, for its part, apologized to customers for a spate of flight cancellations and disruptions and said last week said it would limit growth this year. It earlier announced it would trim its summer schedule.

On Wednesday, Delta deposited 10,000 miles into the accounts of SkyMiles members who had flights cancelled or delayed more than three hours between May 1 through the first week week of July.

“While we cannot recover the time lost or anxiety caused, we are automatically depositing 10K miles toward your SkyMiles account as a commitment to do better for you going forward and restore the Delta Difference you know we are capable of,” said the e-mail to customers, a copy of which was seen by CNBC.

By trimming schedules airlines could keep fares firm at sky-high levels, an important factor for their bottom lines as costs remain elevated, though bad news for travelers.

Preserving the bottom line is key with economic uncertainty ahead.

“They’re not going to get another bailout,” Harteveldt said. “They’ve squandered a lot of their good will.”

Since May 27, the Friday of Memorial Day weekend, 2.2% of flights by U.S.-based carriers were canceled and nearly 22% were delayed, according to flight-tracker FlightAware. That’s up from 1.9% of flights canceled and 18.2% delayed in a similar period of 2019.

Staffing shortages have exacerbated routine problems that airlines already faced, like thunderstorms in spring and summer, leaving thousands of travelers in the lurch because carriers lacked a cushion of backup employees.

Airlines received $54 billion in federal payroll aid that prohibited layoffs, yet many of them idled pilots and urged staff to take buyouts to cut costs during the depths of the pandemic.

“We told Heathrow how many passengers we were going to have. Heathrow basically told us: ‘You guys are smoking something,'” United CEO Kirby said Wednesday. “They didn’t staff for it.”

Still, the big three U.S. carriers all posted profits for the second quarter and were upbeat about strong traveler demand throughout the summer.

For American and United it was their first quarter in the black since before Covid, without federal payroll support. Revenue for both airlines rose above 2019 levels.