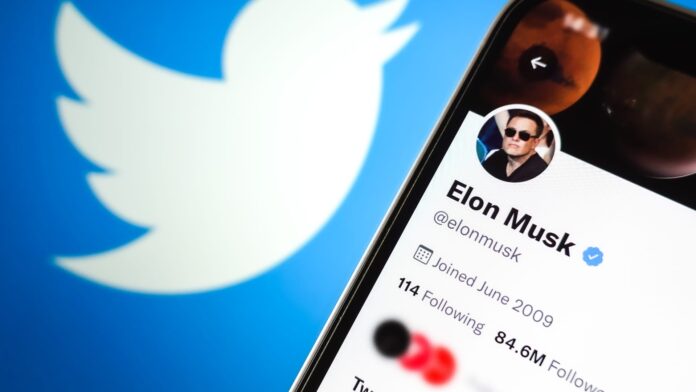 In this illustration, Elon Musk’s Twitter account is displayed on the screen of a mobile phone with the Twitter logo in the background. A whistleblower’s complaint that Twitter misled federal regulators about the company’s security risks could provide Elon Musk with fresh ammunition in his bid to get out of buying the company for $44 billion.

Users who’ve been banned from Twitter for violating its rules, a group that includes former President Donald Trump, will not have the chance to return to the platform for at least another few weeks, the company’s new owner, Elon Musk, said in a tweet Wednesday.

Musk said the delay will give Twitter time to set up a process around determining when and how banned users can return. Musk has said he doesn’t believe in permanent bans and called it a “mistake” to permanently suspend Trump in the wake of the Jan. 6, 2021, insurrection at the U.S. Capitol. Twitter had said at the time it made the decision “due to the risk of further incitement of violence.”

Musk floated the idea of a content moderation council shortly after closing his $44 billion deal to buy the company — which came after a legal battle where he tried to get out of it. He said late last month Twitter would not make any decisions on reinstating accounts until the council convenes.

On Wednesday Musk gave more details about the planned council, saying on Twitter it “will include representatives with widely divergent views, which will certainly include the civil rights community and groups who face hate-fueled violence.”

Musk also said he’d talked to civil society leaders from organizations including the Anti-Defamation League, NAACP, Free Press and Color of Change, “about how Twitter will continue to combat hate & harassment & enforce its election integrity policies.” Twitter will undergo its first major U.S. election under its new ownership on November 8.

Facebook owner Meta already has a similar body that helps adjudicate and advise on the most difficult content moderation questions, including about how the platform should approach Trump’s ban.

Musk tried to reassure advertisers on Oct. 27 that Twitter won’t turn into a “free-for-all-hellscape, where anything can be said with no consequences!” The statement pushed back on fears some progressives have expressed Twitter would become overrun by hate speech and misinformation under Musk, since he had previously said he would pull back on content moderation.

Advertising giant Interpublic Group recommended on Tuesday that all clients of its Media Brands agencies suspend all paid advertising on Twitter for at least a week to wait for clarity on the company’s plans for trust and safety.

Weak yen to boost travel; no full rebound without China

AMC says it ended talks to acquire theaters from Cineworld