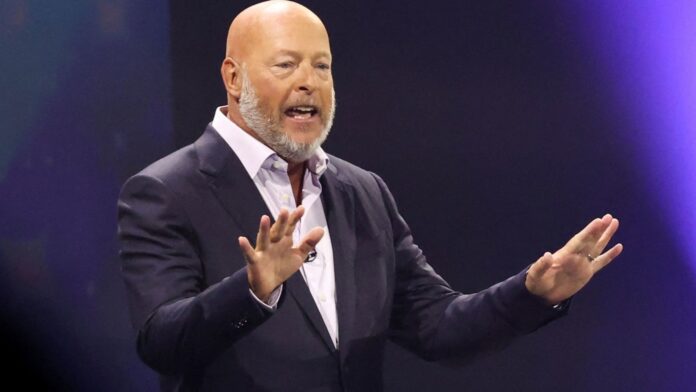 Disney is preparing for Republicans to take control of the House, as polls suggest the party has an edge over Democrats in the days before the midterm elections.

Disney CEO Bob Chapek has been having private phone calls this year with House Republican leaders including Minority Whip Steve Scalise, R-La., according to people briefed on the matter. Scalise is in line to become House majority leader if Republicans take control of the chamber, which would make him the No. 2 official in the majority party.

These people briefed on the calls declined to be named in order to speak about private conversations. Asked about Chapek’s engagement with Scalise and other House GOP officials, a spokesman for Disney said in an email that the company speaks to lawmakers from both sides of the aisle. A spokeswoman for Scalise did not return repeated requests for comment.

The conversations this year are taking place as Republicans on Capitol Hill attack Disney and other companies as “woke” after they took stances on a range of political or cultural issues. The GOP has used the criticism of businesses in part to try to mobilize conservative voters ahead of the elections.

Some Disney executives and their advisors are concerned Republicans could ramp up their attacks on the company if the party wins control of the House, according to people familiar with the matter. They worry the GOP could pressure the company not to speak out on social issues, such as the Supreme Court ruling in June that overturned the right to an abortion enshrined in Roe v. Wade. After the decision, Disney said it would help pay for employees’ pregnancy-related care if they travel to a different state.

“I think there is significant concern now that Republican lawmakers believe in free markets and capitalism but only if they agree with that company,” Cristina Antelo, a Democratic lobbyist who counts Disney as a client, told CNBC in a recent interview.

Though she would not comment directly on Disney, Antelo said that Republicans “can bring pressure on companies that they believe are too woke” if they retake the House majority starting in January.

While most major companies have been preparing for a potential power shift in Washington for months, Chapek has engaged directly with lawmakers poised to become a lot more powerful if the GOP retakes the House.

Scalise and Disney have had a close relationship for years. Scalise’s leadership PAC hosted a fundraising event at Disney World’s Polynesian Village in Florida, Axios reported. Scalise’s campaign has hosted previous fundraisers at Disney World, according to NOLA.com.

Bill Bailey, a senior Disney lobbyist, has donated $1,500 combined to Scalise’s leadership PAC and his reelection campaign since October 2021, according to Federal Election Commission records. Scalise, like all U.S. House members, is up for reelection this year.

Meanwhile, Disney’s company PAC and individual employees have combined to give over $900,000 to federal candidates in the 2022 election cycle, according to data from the nonpartisan OpenSecrets. The data shows 87% of those donations went toward Democrats. Much of the campaign funding this cycle came from individual employees and not the company PAC.

Polling suggests Republicans have a strong chance to win control of the House and could regain the Senate. Democrats have a slim majority in both chambers of Congress, and the party has to rely on Vice President Kamala Harris’ tie-breaking vote in the Senate to cement its majority.

The same survey found 46% of respondents want a Republican-controlled Congress, while a near identical 47% say they prefer Democrats remaining as the majority.

An average of recent polls shows voters slightly prefer Republicans to control Congress over Democrats, according to FiveThirtyEight.

Even as House Republicans lack much of the formal power they would gain by winning the majority, they have tried to pressure Disney and other companies over their stances on social issues.

Many of the calls between Chapek and House Republican officials involve the Disney CEO being “direct” and defending the company’s opposition to Florida’s so-called “Don’t Say Gay” bill, those familiar with the conversations have said. GOP Gov. Ron DeSantis signed the Florida bill, officially called Parental Rights in Education, into law in March.

The law forbids instruction on sexual orientation and gender identity in public schools within the Sunshine State from kindergarten through third grade. After feeling pressure from employees, Chapek and Disney publicly opposed the bill, including after DeSantis signed it.

Though the exact dates of the calls between Chapek and GOP leaders are unclear, a person familiar with them say some took place shortly before and after members of the conservative House Freedom Caucus signed a letter to the Disney CEO in April. The letter specifically called out the company for speaking against the DeSantis-signed legislation.

“We stand in opposition to the dangers posed by corporate wokeness, and we applaud the Florida legislature for giving children and families the tools to fight back against woke indoctrination,” the letter to Chapek reads. Austin Livingston, a spokesman for Freedom Caucus member and letter signatory, Rep. Ralph Norman, R-S.C., said their office has not received a response from Chapek or Disney.

Livingston noted, though, that the South Carolina Republican “simply has no patience for otherwise rational business leaders who cower in fear over woke progressives. He will continue to call out these executives when appropriate.” Norman is up for reelection in 2022. He currently serves on both the House Financial Services Committee and the House Oversight Committee.

Disclosure reports show that since members of the Freedom Caucus sent the letter to Chapek, Disney added former House Republicans Bob Goodlatte and Greg Walden to its legion of lobbyists. They were registered to lobby for Disney in May and June, respectively, according to disclosure reports. Records show Disney already had CGCN, a Republican-led lobbying firm, on retainer.

Disney spent just over $2.3 million on in-house lobbying from the start of the second quarter through the end of the third quarter, records show.

The company shelled out $1.37 million in the second quarter alone. The sum makes it the most the company has spent on its in-house lobbying efforts in a single quarter since the first quarter of 2011, according to disclosure reports.

Investors overwhelmingly believe the S&P 500 bottom for this drawdown is not in yet, survey shows