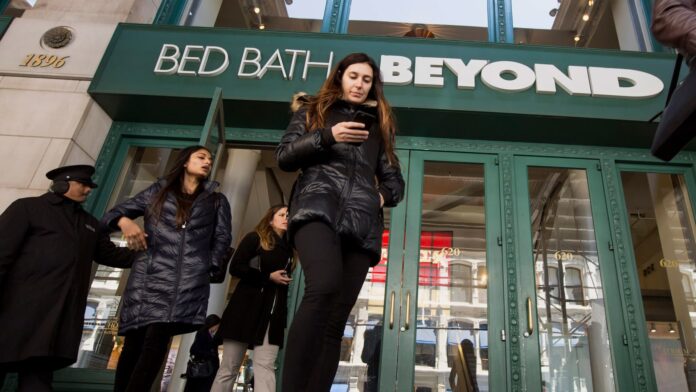 Crossen, who took over the role as of Monday, will also continue as the company’s chief accounting officer, Bed Bath & Beyond said in a regulatory filing.

Arnal’s death was ruled a suicide by New York City’s medical examiner this weekend. Police said he fell to his death Friday from a skyscraper in downtown Manhattan.

Shares of Bed Bath & Beyond closed at $7.04, down about 18%, as investors weighed the struggling retailer’s path forward. The company is looking for a new CEO after its board ousted Mark Tritton in June. It said last week it would eliminate the jobs of chief operating officer and chief stores officer.

Sue Gove, a Bed Bath board member, has stepped in as interim CEO. She is founder of a retail consulting firm and has served in executive roles, including chief operating officer of jewelry company Zale.

The home goods retailer is trying to turn around slowing sales and regain market share that it has lost to competitors. As it prepares for the holiday season, Bed Bath & Beyond announced last week that it had secured more than $500 million in additional funding and laid out a plan to manage costs, including layoffs and the closure of about 150 stores.

Bed Bath’s challenges are being compounded by a shift away from popular pandemic categories, such as home goods, as people spend on services like dining out and traveling again. Other retailers, including Walmart and Kohl’s, have also seen a pullback in discretionary categories as people spend more on food and necessities because of inflation.

If you are having suicidal thoughts, contact the Suicide & Crisis Lifeline at 988 for support and assistance from a trained counselor.

Correction: This story has been updated to correct the spelling of Laura Crossen’s name.