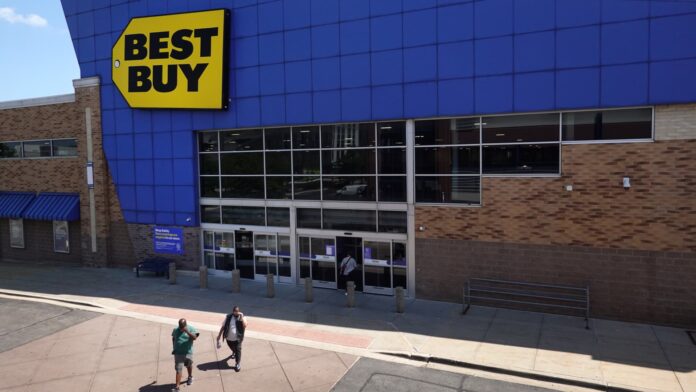 Customers shop at a Best Buy store on August 24, 2021 in Chicago, Illinois.

Best Buy on Wednesday cut its forecast for its fiscal year and second quarter, saying it has seen weaker demand for consumer electronics amid inflation.

The consumer electronics retailer said it now expects same-store sales to decline about 13% for the current three-month period, which ends Saturday. That’s lower than what Best Buy said in May, when it predicted comparable sales would be roughly in line with the 8% decline in the first quarter.

For the 12-month period that ends in late January, Best Buy said it expects same-store sales to decline around 11%, compared with the drop of between 3% and 6% that it forecast in May.

Best Buy said it will pause share buybacks, but will continue to pay its quarterly dividend. It also said in a news release that it “will continue to actively assess further actions to manage profitability.” The company did not immediately respond to a request for details about those potential steps.

With Wednesday’s announcement, Best Buy joins a growing list of retailers including Gap, Adidas, Kohl’s, Target and Walmart that have warned of lower sales or profits as consumers feel pinched by inflation or shift spending to services, such as travel and dining out, rather than goods.

Yet Best Buy said its inventory levels at the end of the second quarter will be approximately flat compared with the year-ago period. That’s a notable difference from Walmart, Target and Gap, which have a glut of unwanted inventory weighing on profit margins.

Best Buy already anticipated its sales would slow as it lapped a period when consumers had stimulus dollars and unusually big appetites for new laptops, home theater equipment and kitchen appliances during the pandemic. It had already lowered its forecast in May.

At that time, CEO Corie Barry said consumers were “pulling back at a faster, deeper pace than we had initially assumed,” as they spent money on experiences or became more budget-conscious as food and gas prices rose.

“As high inflation has continued and consumer sentiment has deteriorated, customer demand within the consumer electronics industry has softened even further, leading to Q2 financial results below the expectations we shared in May,” she said in a news release.

Yet she added that its sales are higher than before the pandemic, emphasizing the company’s strong position even in a turbulent time.

The company has chased new growth opportunities, such as adding merchandise like exercise equipment, electric bikes and high-tech beauty gadgets, and launching Totaltech, a subscription program that includes perks like tech support and extended warrantees.

Best Buy’s announcement comes after Walmart sent shockwaves across the retail industry on Monday, when the big box behemoth cut its profit outlook. Walmart also said consumers are skipping over higher-margin discretionary goods as they must pay more for food and gas. The company raised its sales outlook, however, saying shoppers have turned to its stores for low-priced groceries.

Target slashed its profit margin forecast twice, first in May and then in June, saying it would take aggressive steps to get rid of unwanted merchandise ahead of the crucial back-to-school and holiday seasons — including cancelling orders and offering deep discounts.

Best Buy shares initially fell more than 10% following the announcement, but shares were only down about 2% after investors digested the news. The company will report its second-quarter earnings results on Aug. 30.

Chipotle restaurant in Michigan votes to unionize, in a first for the chain