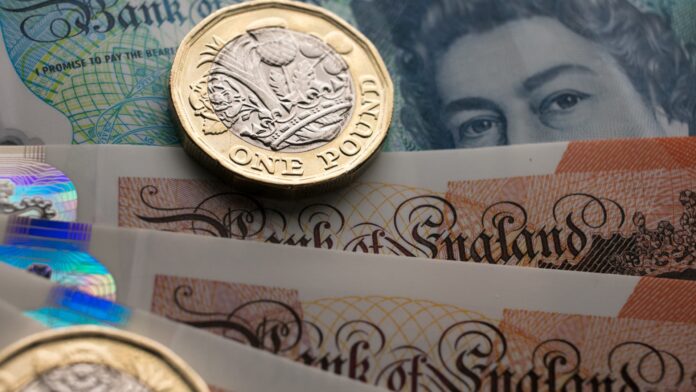 LONDON — The British pound on Thursday sank sharply against the U.S. dollar after the U.K.’s central bank said it expected a recession to last for all of 2023 and the first half of 2024.

It came as the Bank of England raised rates by 75 basis points to 3% in its largest single hike for 33 years.

But it also said it expected rates to peak at a lower level than currently priced into financial markets, which is around 4.6%.

“The majority of the Committee judges that, should the economy evolve broadly in line with the latest Monetary Policy Report projections, further increases in Bank Rate may be required for a sustainable return of inflation to target, albeit to a peak lower than priced into financial markets,” its statement said.

BOE Governor Andrew Bailey said in a press conference following the announcement it was “important because, for instance, it means that the rates of new fixed-term mortgages should not need to rise as they have done.”

The pound has been rocked over the last month by instability in U.K. financial markets and political turmoil.

It touched a record low against the dollar below $1.10 in September, and analysts have warned it remains vulnerable.

“This is not the first time that GBP has fallen in reaction to a BoE rate hike this year,” said Jane Foley, head of FX strategy at Dutch bank Rabobank, in emailed comments.

“In May the pound moved lower after an as expected 25 bps rate hike and in August the pound fell after the Bank hiked rates but simultaneously warned of a 5 quarter recession starting in Q4 2022.”

“In terms of the U.K. economy, Bank staff now expect that GDP contracted by 0.5% in Q3 2022, 0.9 percentage points weaker than anticipated in the August Monetary Policy Report.”

“Crucially, the Bank also warned that the movement higher in rates will be ‘to a peak lower than priced into financial markets’. So there was very little from the Bank to prevent GBP moving lower.”