HomeInvestingThe S&P 500’s first-half slump may not be as rare – or...
Investing 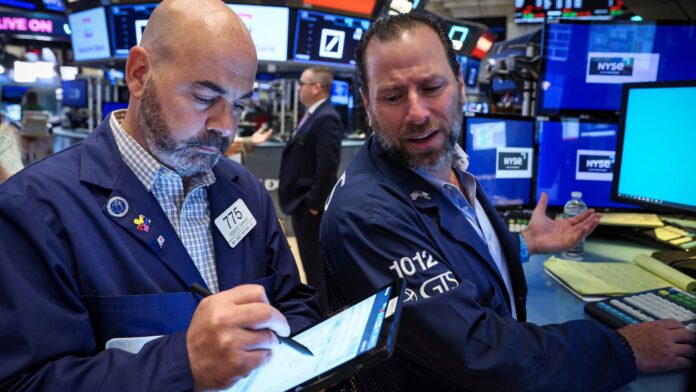 This is the daily notebook of Mike Santoli, CNBC’s senior markets commentator, with ideas about trends, stocks and market statistics. The market is struggling to seize on a plausible retreat in inflation at a time when the risks to growth seem more present, yet the Federal Reserve will likely require more time and data to ease back on tightening. But the intraday bounce especially after Europe closed implies there wasn’t much fresh in the numbers, and the drop in Treasury yields and oil prices are providing modest solace for now. After another feeble, unconvincing rally from the mid-June low, the market reverts to the pretty well-defined downtrend to close out an historically rough first half of the year. Is there a chance the recent lows just above 3,600 hold? Sure, it’s conceivable, with sentiment and positioning deeply negative and a lot of valuation payback already in the books. But it’s tough to have high conviction that this will be the case. One slightly interesting touchpoint on the two-year S & P 500 chart is the proximity of the recent low to the level first reached in reaction to the initial positive trial results for the Pfizer/BioNTech Covid vaccine in early November 2020. Might seem like a reach, but in a way a more relevant round-trip destination than the pre-pandemic, pre-vaccine reality of February 2020 or the post-crash depths. The personal consumption expenditures inflation number was less scary than some anticipated, though still elevated with the core exceeding 4% annualized. The Federal Reserve is still on track to jack rates as much as it can unless/until the market/economy become disorderly in their suffering. This is where the market’s inherent impatience and attempts to start positioning for the next big macro/policy turn causes complications. The bond market is quickly moving to price in hefty rate cuts in 2023 following a bump in short rates to 3%+ this year, presumably in response to a recession or serious threat of one. Piper Sandler shows here that the anticipated drop in the fed funds rate from six months ahead to 18 months ahead has rarely been sharper, and in the past this kind of move has preceded recession. We need to stay aware of all these patterns and atmospherics, especially as the credit markets show more stress and brace for potential corporate downturn. But at the same time, this cycle has been so compressed and idiosyncratic – we had a flash recession with very little household financial suffering, followed by the fastest recovery in activity and risk assets on record, then a whipsaw inflation/Fed pivot that has sped up the “late-cycle” dynamics. Very open to the chance that this could be a highly unorthodox recession – with fairly benign employment loss, perhaps, but maybe we have more payback to do in equities/corporate valuations given the froth build-up that preceded it. Much talk of this being the worst first six months of a year since 1970, but part of this is the quirk that we peaked right on Jan. 3 this year. At the start of 1970, stocks had already been dropping for 13 months, were 20% off their highs. Historical rolling six-month returns for the S & P 500 show we’re rivaling some extreme weakness and a few good long-term buying opportunities (all except the 2008-09, early-2000s and 1973-74 episodes). It also shows such half-year drawdowns aren’t nearly as rare as the “first in 52 years” talk would suggest. Market breadth is poor but no real washout. Semis are a bright spot after tagging new lows. As noted, credit spreads have widened out toward levels that should get the attention of equity investors and perhaps Fed folks. They’re still orderly enough but getting to a point of being pretty restrictive and indicative of poor liquidity conditions in the fixed-income complex. VIX up a small amount, stuck in the high-20s. We might have to have a fuller “surrender” phase that requires a more comprehensive stampede out of the market and a headlong rush for downside protection, but there is no set playbook for how a market that’s already undergone months of liquidation must behave.