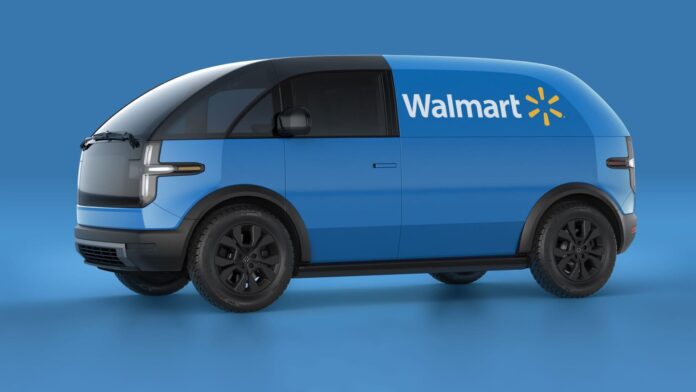 Walmart to Purchase 4,500 Canoo Electric Delivery Vehicles to be Used for Last Mile Deliveries in Support of Its Growing eCommerce Business

Electric vehicle startup Canoo said Tuesday Walmart has agreed to buy at least 4,500 of its upcoming electric delivery vans, in a significant win for the embattled vehicle maker.

Shares of Canoo gained more than 50% following the news.

Walmart has signed a “definitive agreement” to purchase at least 4,500, and possibly as many as 10,000, of its all-electric Lifestyle Delivery Vehicles, a small electric van designed for local delivery service, Canoo said.

Walmart is leaning on its thousands of stores to deliver online purchases quickly and at a lower costs — and compete with Amazon, an online rival known for its speed. It has rolled out and expanded e-commerce services, including InHome, which delivers groceries directly to customers’ fridges and Express Delivery, which drops purchases at shoppers’ doors in two hours or less. Unlimited home delivery of groceries is also a key perk of Walmart+, an annual membership service that the big-box retailer wants to grow.

But to expand those services, it needs more delivery vans. InHome is powered by an all-electric fleet.

The big-box retailer plans to use electric vans from all three companies for InHome and other local deliveries. It intends to increase the availability of InHome from 6 million to 30 million households by the end of this year, as it adds major metros like Los Angeles and Chicago.

The shift also comes at a time when fuel is weighing on Walmart’s profitability and making online deliveries more expensive. The company said last week in a memo that it would charge some suppliers new fees to transport goods to its warehouses and stores.

Canoo’s vans will be built at its Oklahoma factory and are expected to begin going into service next year. Terms of the deal were not disclosed.

Canoo is one of several U.S.-based electric vehicle startups to have gone public via mergers with special purpose acquisition companies, or SPACs. The company’s shares briefly surged to over $20 after its stock market debut in late 2020, but have slid since co-founder and CEO Ulrich Kranz departed last year.

As of Tuesday’s close the stock was trading at $3.63 per share.

— Reuters contributed to this report.

Correction: This story has been updated to reflect that the vans will be built in Canoo’s factory in Oklahoma.