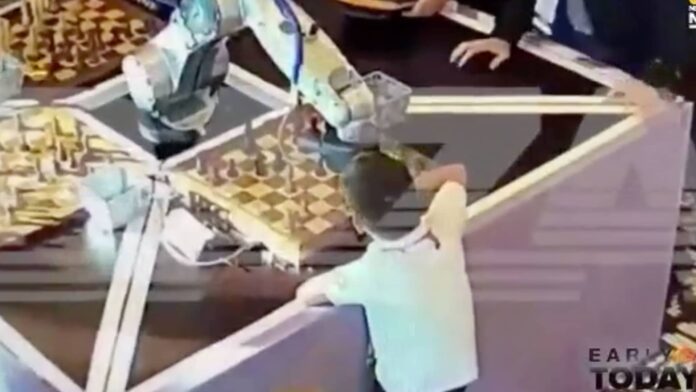 A chess-playing robot fractured the finger of its 7-year-old opponent during a tournament in Moscow last week.

The incident happened after the boy hurried the artificial intelligence-powered robot, the president of the Moscow Chess Federation told the Russian state news agency Tass. “The robot broke the child’s finger — this, of course, is bad,” Sergey Lazarev said.

Video of the incident, which occurred at the Moscow Chess Open competition Tuesday, went viral on social media after a post by the local outlet Baza News.

It shows the machine reaching for and grabbing one of the boy’s chess pieces, and quickly discarding it from the board. Before the robot’s arm retracted, the boy attempted to make another move, pushing one of his rooks into the same place as the recently removed piece.

The video then shows the robot’s mechanical claws descending back toward the board, this time grabbing the boy’s index finger instead of a chess piece.

The video shows the robot holding the finger in place for at least 15 seconds before two bystanders were able to pry open the claws and release the boy.

“The child made a move, and after that it is necessary to give time for the robot’s response, but the boy hurried, the robot grabbed him,” Lazarev told Tass on Thursday. He added that the boy continued playing in the tournament with his finger in a cast.

The boy’s parents were keen on contacting the prosecutor’s office, he added. “We will communicate, try to sort it out and help in any way we can. And the robot operators, apparently, will have to think about strengthening protection so that such a situation does not happen again.”

The Telegram post from Baza News identified the boy as Christopher and said he is one of the top 30 chess players in Moscow under the age of 9.

The incident received a lot of attention on social media. “I tried to warn you!” tweeted Garry Kasparov, a Soviet-era World Chess champion who was defeated in a 1997 match against Deep Blue, a chess-playing supercomputer developed by IBM scientists.

Since Kasparov’s loss, chess AI has only become stronger. Maia Chess — an ongoing project by researchers at the University of Toronto, Microsoft Research and Cornell University — seeks to use chess as a case study for how to use AI to help humans improve skills.

Last week’s incident may also serve as a case study for the dangers involved.