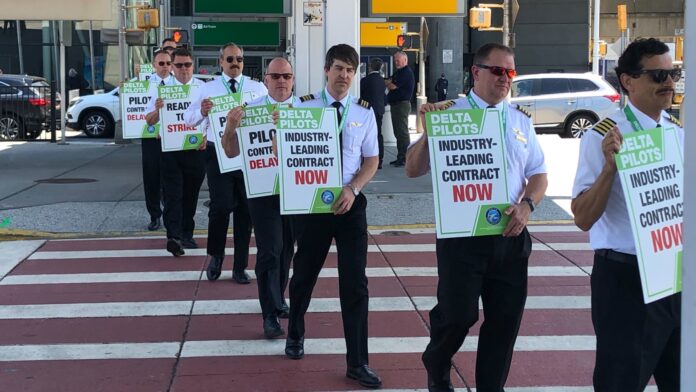 Delta Air Lines pilots voted overwhelmingly to authorize a strike if contract talks between the carrier and the union don’t lead to an agreement, the labor group said Monday.

A strike wouldn’t be immediate and it would require permissions from the federal National Mediation board. The Air Line Pilots Association union said it wants a contract, not a strike.

Covid derailed contract talks throughout the airline industry starting in 2020. Talks have since resumed, and the Delta pilot strike vote underscores the difficulty in getting agreements through.

Pilots for U.S. carriers like Delta and competitors American Airlines, United Airlines and Southwest Airlines have have recently picketed at major airports to demand better contracts as the industry returns to profitability.

“Meanwhile, our negotiations have dragged on for too long. Our goal is to reach an agreement, not to strike,” said Capt. Jason Ambrosi, chair of the Delta master executive council of the Air Line Pilots Association. “The ball is in management’s court. It’s time for the Company to get serious at the bargaining table and invest in the Delta pilots.”

Delta didn’t immediately respond to a request for comment.

Earlier this year, Alaska Airlines pilots voted to authorize a potential strike. Pilots for that airline recently reached a new contract agreement with the company.