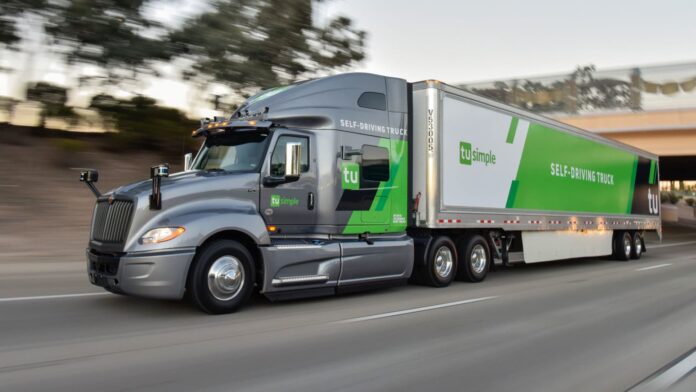 TuSimple, partly owned by UPS, makes self-driving trucks, a technology that may be among the innovations to help lower longer-run inflation in the transport sector.

The San Diego-based startup’s operations chief, Ersin Yumer, will serve as interim CEO and president while TuSimple’s board of directors searches for a permanent successor. Hou was also the company’s chief technology officer.

Shares of TuSimple fell sharply following the news, closing down over 45% on Monday.

TuSimple said in a regulatory filing Monday that based on an investigation by its board of directors, it believes some of its employees spent paid hours in 2021 working for Hydron, a Chinese startup developing autonomous hydrogen-powered trucks. Those employees shared confidential information with Hydron before a nondisclosure agreement was signed, TuSimple said.

The board’s investigation began in July and is ongoing, the company said.

In a statement posted to LinkedIn on Monday, Hou said that he was removed “without cause” and that he is confident he will be “vindicated” in time.

“I have been completely transparent in both my professional and personal life and I fully cooperated with the Board because I have nothing to hide,” Hou wrote. “I want to be clear that I fundamentally deny any suggestions of wrongdoing.”

The company’s relationship to Hydron is under investigation by the Federal Bureau of Investigation and the Securities and Exchange Commission, according to a report Monday by The Wall Street Journal. Investigators are examining whether TuSimple’s leadership failed to make required disclosures about its transactions with Hydron and whether the dealings harmed TuSimple investors, according to the report.

A representative for TuSimple declined to comment on the specifics of the Journal’s report.

Hou co-founded TuSimple in 2015 and became its CEO in March of this year. Shortly after taking the top job, he told CNBC that he wanted to be an “evangelist” for the potential of autonomous trucking.

“Who is the best person to lead this company? It’s me! Because I am a relentless decision-making machine who is backed by the technical background,” Hou said in an interview with CNBC on March 30.

Hydron was founded in 2021 by Mo Chen, another co-founder of TuSimple who had previously served as its executive chairman. Hydron initially announced plans to build electric trucks powered by hydrogen fuel cells in North America, but its operations have so far been mostly in China.

TuSimple will report its third-quarter results on Monday after the market closes but has delayed its conference call to Tuesday morning.

Why one stock brokerage is bullish on Reliance Industries and Infosys

These were the week’s top performers, and Wall Street sees two of them rallying another 30%