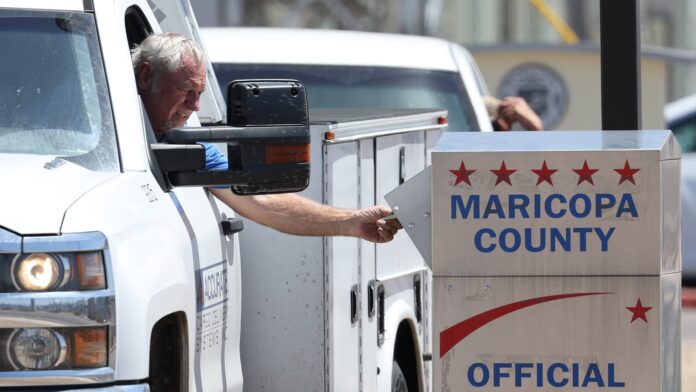 A voter places a ballot in a drop box outside of the Maricopa County Elections Department on August 02, 2022 in Phoenix, Arizona.

A pair of armed and masked men in tactical gear stood guard at ballot drop boxes in Mesa, Ariz., on Oct. 21 as people began early voting for the 2022 midterm elections.

They belonged to an election monitoring group called Clean Elections USA, which has echoed former President Donald Trump’s false claims that the 2020 election was stolen. The group says it’s watching early voting in select counties for signs of fraud. But its presence caused unease among Maricopa County voters, who saw these “drop box watchers” as a blatant attempt at voter intimidation.

“Uninformed vigilantes outside Maricopa County’s drop boxes are not increasing election integrity. Instead they are leading to voter intimidation complaints,” Maricopa County election officials Bill Gates and Stephen Richer said in a joint statement the next day.

A U.S. District Court judge appointed by Trump, Michael Liburdi, ordered members of Clean Elections USA to stay at least 75 feet away from drop boxes and not to follow or speak to voters. They were also told they couldn’t openly carry weapons. The ruling was in response to a temporary restraining order filed by two voter advocacy groups, alleging the poll watchers were trying to “bully and intimidate lawful Arizona voters.”

“We are deeply concerned about the safety of individuals who are exercising their constitutional right to vote and who are lawfully taking their early ballot to a drop box,” Gates and Richer said.

While Arizona has seen a host of voter-intimidation reports, the state is certainly not alone. Fears about voter intimidation and suppression have been brewing nationwide since the 2020 presidential election, when Trump refused to accept his loss and accused several states of voter fraud.

The rising rhetoric has tensions running high going into Tuesday’s midterms. Two in five U.S. voters said they were worried about threats of violence or voter intimidation at the polls, according to a new Reuters/Ipso poll.

The same disinformation about election fraud that fueled the Jan. 6, 2021, Capitol riot is the same disinformation that’s “threatening political violence related to our elections,” Mary McCord, the executive director of the Institute for Constitutional Advocacy and Protection and former federal prosecutor, said in an interview on PBS Newshour:

“And by political violence, I don’t just mean physical violence. I mean intimidation, voter intimidation, intimidation and threats and harassment against our election workers, aggressive recruitment of poll watchers from groups like the Proud Boys and Oath Keepers to be really a force for intimidation at the polls, and other types of really anti-democratic processes that are being driven, again, by the same disinformation and lies about the 2020 election,” McCord said.

President Joe Biden noted the rise in political violence in a speech Wednesday night, calling on voters to go to the polls next week to help preserve democracy.

“There’s an alarming rise in the number of people in this country condoning political violence or simply remaining silent,” Biden said. “In our bones we know democracy is at risk, but we also know this: It’s in our power to preserve our democracy.”

His remarks also came on the heels of the violent attack against House Speaker Nancy Pelosi’s husband, Paul, in their San Francisco home.

Rep. Alexandria Ocasio-Cortez, D-NY, said the country was facing an “environment of fascism.”

“This type of intimidation at the polls brings us to Jim Crow,” Ocasio-Cortez said in an Oct. 28 interview on MSNBC’s “All In With Chris Hayes.” “It brings us back and harkens back to a very unique form of American apartheid that is not that long past ago.”

With political-violence and voter-suppression concerns at an all time high, federal agencies and nonprofits are taking the threat to election integrity with heightened seriousness.

The Department of Justice stepped up efforts in recent weeks to protect voters and election workers. The agency launched an election threats task force in July 2021 to ensure voters are safe at the polls and to investigate intimidation of election workers.

In early October, the FBI warned voters about possible election crimes ahead of the midterms, emphasizing its efforts to educate voters on their rights and encouraging them to report violations. Election crimes fall under three broad categories, according to the FBI: ballot or voter fraud, campaign finance violations and the violation of civil rights, including voter suppression or voter intimidation.

The DOJ has made a point of underscoring its hard-line position against voter intimidation.

“The Justice Department has an obligation to guarantee a free and fair vote by everyone who’s qualified to vote and will not permit voters to be intimidated,” Attorney General Merrick Garland said during an Oct. 24 press briefing.

The Brennan Center for Justice, a nonprofit law and public policy institute, identified 10 states at a high risk of disruption due to the volume of false allegations and anti-voter activity. They are Arizona, Florida, Georgia, Michigan, Nevada, New Hampshire, North Carolina, Pennsylvania, Texas and Wisconsin.

Many states have instituted additional safeguards to help ease concerns in the lead-up to, and on, Election Day.

In New York, Attorney General Letitia James issued voter-protection guidance to local boards of elections and law enforcement. The 15-page guide outlines the constitutional and legal protections afforded to voters, as well as what is permitted at polling stations and what is not. James also established a statewide election protection hotline for voters.

“Voting is a fundamental right and integral to the sanctity of our democracy, and I urge anyone who encounters obstacles to contact my office. I will not allow anyone to threaten the right to vote in New York state,” James said in a statement.

Similarly, New Jersey Attorney General Matthew Platkin established a voter protection initiative to identify and address any voting rights or civil rights violations in early voting and at the polls “to ensure that every eligible voter will be able to cast a ballot, and that anyone who attempts to interfere with the voting process will be held accountable to the full extent of the law.”

Nonpartisan voter-protection hotlines also are available in Illinois, Indiana, North Carolina and Montana, in addition to hotlines run by the American Civil Liberties Union at both the state and national level. Election Day voters can call local election offices to report any complaints.

“We always hope and expect that elections will run smoothly and voters will not encounter any problems.  However, we know that issues do arise and we are on standby to help voters resolve these issues and make sure their voices are heard,” ACLU West Virginia advocacy director Eli Baumwell said in a statement.

Why your credit score is so important as interest rates rise