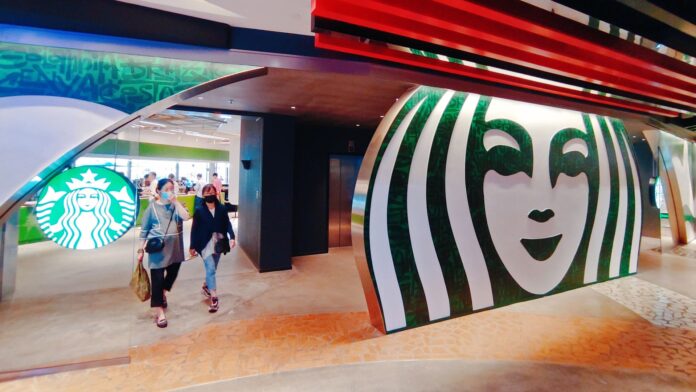 The Seattle-based coffee company also said U.S. traffic improved in the quarter, and has nearly bounced back to 2019 levels.

Here’s what the company reported for the quarter ended Oct. 2 compared with what Wall Street was expecting, based on a survey of analysts by Refinitiv:

Net sales for the period rose 3.3% to $8.41 billion. Global same-store sales increased 7%, fueled by increased spending in its home market.

In the United States, Starbucks reported same-store sales growth of 11%, which was the result of people spending more on average and a slight uptick in traffic. Prices were also up 6% from a year ago, but executives said they don’t plan to raise prices anymore for the time being.

The company’s loyalty program saw its active membership climb 16% to 28.7 million people in the quarter.

In September, the Seattle-based company unveiled a broad plan to reinvent its business to address changing consumer and employee needs. Some of those updates will include new equipment to make cold drinks more easily.

The ornate art decor of the Starbucks coffee chain in Xujiahui district attracts customers’ attention in Shanghai, China, May 12, 2021.

For fiscal 2023, Starbucks is projecting revenue growth of 10% to 12%, despite a 3% hit from foreign currency translation. The company also expects its global same-store sales growth on the high end of its prior range of 7% to 9%. However, the fiscal first quarter will likely be on the low end of that range due to lockdowns in China.

Starbucks also said that its adjusted earnings per share growth in fiscal 2023 will be on the low end of its prior range of 15% to 20%, citing the costs of its reinvention plan.

Ruggeri also said that the company is predicting that commodity headwinds will continue into fiscal 2023, although at a lower level than in fiscal 2022.

Excluding restructuring and impairment costs, the sale of its Russian joint venture and other items, Starbucks earned 81 cents per share.

Coinbase shares to get cut nearly in half as retail traders shun crypto, Mizuho predicts

One EV maker is best positioned as the group is hit by China concerns, Mizuho says