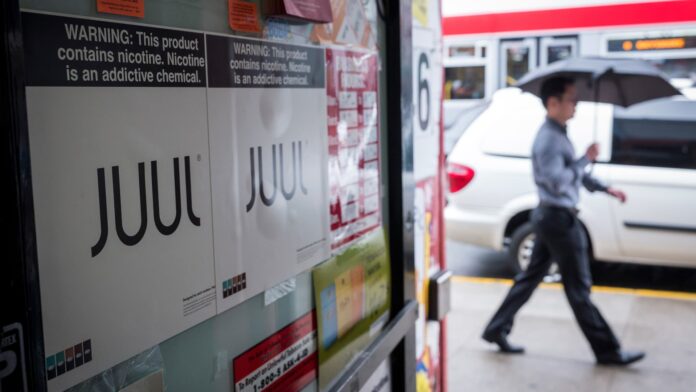 The Food and Drug Administration announced Thursday that it will ban the sale of Juul e-cigarettes in the U.S.

The decision is part of the agency’s broader review of the vaping industry following years of pressure from politicians and public health groups to regulate the segment as strictly as other tobacco products after vaping became more common among high schoolers.

The decision to ban the sale of those remaining products by Juul deals a hefty blow to the company. Juul’s international expansion efforts have been hamstrung by regulations and a lack of consumer interest. The U.S. remains its largest market.

The FDA said Juul’s applications gave insufficient or conflicting data about the potential risks of using the company’s products.

“Without the data needed to determine relevant health risks, the FDA is issuing these marketing denial orders,” Michele Mital, acting director of the FDA’s Center for Tobacco Products, said in a statement.

Juul must stop selling and distributing its products in the U.S., but the FDA cannot enforce individual consumer possession or use of the company’s e-cigarettes.

A representative for Juul did not immediately respond to a request for comment from CNBC.

In FDA decisions over the last year, rival e-cigarette makers British American Tobacco and NJOY won approvals for their e-cigarettes, although the FDA rejected some of the flavored products submitted by the companies. The agency said it approved both companies’ tobacco-flavored products because they proved they could benefit adult smokers and outweighed the risk to underage users.

The FDA has been making strides to cut down nicotine use in traditional tobacco products, too. On Tuesday, the agency said it plans to require tobacco companies to slash the nicotine content in cigarettes to minimally addictive or nonaddictive levels.

In 2019, federal data found that more than 1-in-4 high school students had used an e-cigarette in the past 30 days, up from 11.7% just two years prior. An outbreak of vaping-related lung disease in 2020 only heightened concerns about e-cigarettes.

Juul had been the market leader in e-cigarettes since 2018, according to Euromonitor International. As of 2020, the company held 54.7% share of the $9.38 billion U.S. e-vapor market.

E-cigarettes deliver nicotine to users by vaporizing liquid in cartridges or pods. Nicotine is the ingredient that makes tobacco addictive, and it may have other negative health effects. However, e-cigarette manufacturers have argued that their products can deliver nicotine to addicted adult smokers without the health risks that come along with burning tobacco.

Marlboro owner Altria bought a 35% stake in Juul for $12.8 billion in late 2018. However, Altria has slashed the value of the investment as Juul and the broader e-cigarette industry became embroiled in controversy. As of March of this year, Altria valued its stake at $1.6 billion, an eighth of its original investment, and Juul itself at under $5 billion.

The FDA decision will likely also hurt Juul’s defense in U.S. courts as it faces lawsuits from a dozen states and Washington over allegations that it marketed its products to minors and played a major role in the vaping epidemic. It has already settled with North Carolina for $40 million and Washington state for $22.5 million.

The FDA gained the power to regulate new tobacco products in 2009. Over the last decade, thousands of e-cigarettes appeared on store shelves without any approval from the agency, which allowed the sale of those products as it phased in standards for the burgeoning industry.

This is a breaking news story. Please check back for updates.