HomeBusinessFrom Teslas to BMWs, cars are piling up on land and sea...
Business

From Teslas to BMWs, cars are piling up on land and sea at German port 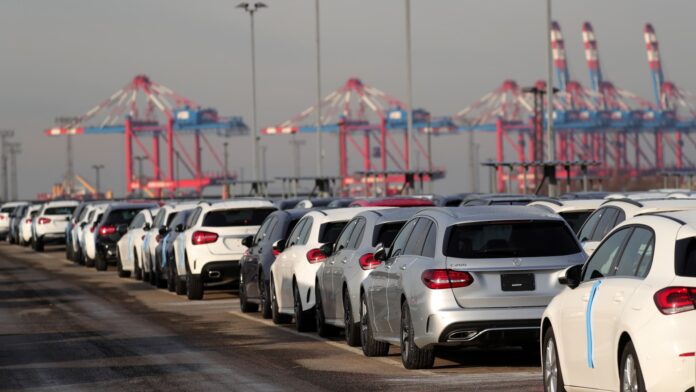 The Port of Bremerhaven, the main roll on/roll off port in Germany and one of the largest automobile hubs in the world, is experiencing gridlock.

The combination of the lack of drivers to move containers and cars out of the port and high volumes of regular trade is creating a pileup of vehicles on land and at sea from automakers including Tesla, Stellantis, BMW, Renault and Volvo.

“These delays are massive,” said Andreas Braun, regional director of ocean product, EMEA, for Crane Worldwide Logistics. He said car imports into Bremerhaven from the U.S. and Mexico are operating on a timeline of months. “There is a three-month delay for BMW, where cars sit in yards waiting to be fitted with extras, especially with the iDrive touch controller.”

Trade intelligence firm VesselsValue tells CNBC that operators have been told by the Port of Bremerhaven there is a severe shortage of H&H (high and heavy cargo) drivers and roll on/roll off drivers to move the incoming automobiles. Military exercises have absorbed a fair amount of terminal space usually reserved for operators.

There are also currently not enough ocean vehicle carriers, a situation which has led shipping line Wallenius Wilhelmsen to refuse export bookings to the U.S. for the months of October and November, and possibly December if waiting hours pick up again, said Dan Nash, head of vehicle carriers and roll on/roll off carriers) at VesselsValue.

Its data shows the refusal of auto exports has helped reduce the processing time at the port which has spiked in recent months, and is now trending up again.

Nash told CNBC that highlighting challenges for automakers are imports of Tesla from its Shanghai Gigafactory and light-duty vehicles mostly brought in from Japan, South Korea and China.

In addition to the labor constraints at the key port, stretched vessel capacity is adding to the delays.

The global fleet is short approximately 13 vessels compared to December 2019, according to VesselsValue data. “This is a result of excess scrapping of vessels in the first year of Covid-19. This wait time is expected to last until 2024 when the newly built vessels start to be delivered,” Nash said.

While prices have come down across the global supply chain from Covid peaks, “this is likely to keep rates high because vessels are trading at full capacity,” he said. Growing demand for electric vehicles from China will place greater strain on the supply-demand in the future, he added.

At the Port of Liverpool in the U.K., a fourth strike is set for November 14-21 if no deal with port management is reached. Braun told CNBC that since these strikes are well organized there is time in advance to plan and circumvent the port, diverting trade elsewhere. Truckers and other workers who depend on the port operating as normal will be hit harder, he said.

“If there are no containers coming in and going out, there is no business for them and they have to pull out of container trucking and truck something else,” Braun said. “Eventually, less volume also means that Peel Ports might have good arguments to lay off workers.”

Peel Ports is the owner of the Liverpool port, among others in the U.K.

Braun says Crane Worldwide Logistics is also prepping clients for additional strikes being discussed at Felixstowe, the U.K.’s largest container port, which has had a series of strikes, and a possible strike at London Heathrow.