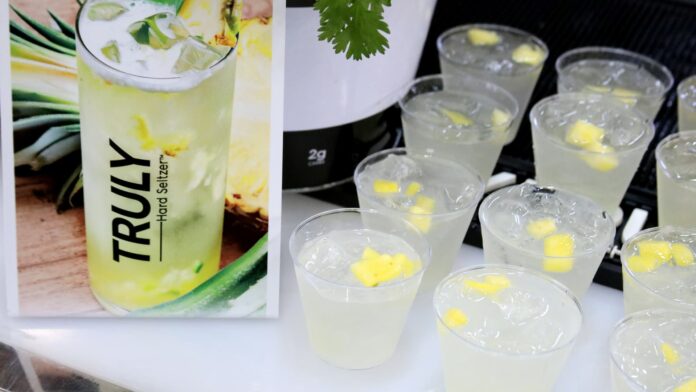 The waning popularity of hard seltzer brand Truly is about to cut Boston Beer’s momentum, according to Goldman Sachs. Analyst Bonnie Herzog downgraded shares of the Sam Adams brewer to sell from neutral, saying in a Tuesday note that lower consumer interest in hard seltzer, and a lackluster product pipeline, will dampen its sales. “We are incrementally more cautious on SAM and downgrade our rating to Sell from Neutral following recent feedback from our beer distributor contacts indicating that Truly’s momentum has decelerated further,” Herzog wrote. Goldman Sachs lowered its 12-month price target to $318, a 16% cut. The new price target is about 5% lower than where shares closed Monday. Herzog expects Truly’s shipments this year will drop by about 22% as its popularity stalls. About 60% of distributors said retail shelf space for Truly has been cut this year, and Truly demand is falling even faster than the broader hard seltzer category. Still, Boston Beer could get a boost from growing Twisted Tea sales this summer. Shipments of Twisted Tea are expected to grow by 20%, she said. Other innovations include the roll out of Hard Mountain Dew and a broader line of Truly’s products. However, Herzog said she is skeptical whether this is enough, citing lack of excitement among distributors for her opinion. “Against this backdrop, a key debate for SAM emerges: Is a stronger outlook for Twisted Tea and SAM’s efforts with innovations enough to offset a significantly more bearish outlook for Truly? We think not,” she wrote. Shares of Boston Beer dipped more than 3% in Tuesday premarket trading. —CNBC’s Michael Bloom contributed to this report.