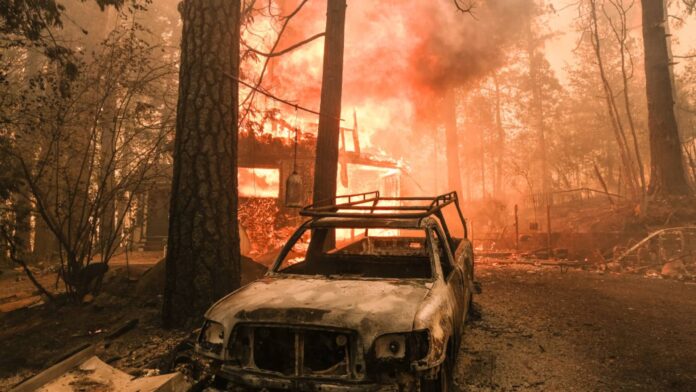 A structure burns behind a charred vehicle on Jerseydale road during the Oak Fire in Mariposa County, California, US, on Saturday, July 23, 2022.

When Newsom declared a state of emergency on Saturday, the fire had burned more than 11,500 acres of the fire and forced more than 3,000 residents to evacuate, according to a written statement from the Governor’s office.

By Monday morning, the Oak Fire had burned 16,791 acres and was 10 percent contained, according to the California Department of Forestry and Fire Protection.

By acres burned, the Oak Fire is already the largest wildfire of 2022, according to public records from the California Department of Forestry and Fire Protection.

As dangerous as the Oak Fire wildfire is for those in its path of destruction, it is not yet close to the largest wildfire in the history of California. The August Complex fire in August 2020 burned more than one million acres and took 935 structures down, according to historical records maintained by California Department of Forestry and Fire Protection.

The cause of the fire was still under investigation, according to the California Department of Forestry and Fire Protection.

But the wildfire has spread quickly because of hot, dry weather and drought conditions, the statement from Newsom’s office says.

And it is those dry conditions that are the dangerous catalyst for the most dangerous California wildfires. For Northern California, wildfire season runs from July through October, according to the Western Fire Chiefs Association, which represents fire related emergency service workers. Southern California wildfire season starts as early as May. But it’s the wildfires that start later in the season, in September and October, that tend to be the most dangerous because they have the most dry vegetation built up from the hot summer weather and because of strong dry winds that blow through California in the fall.

Currently, 100% of the residents of Mariposa County are affected by a drought, according to the federal drought information service, which is run by the National Oceanic and Atmospheric Administration (NOAA). So far, 2022 is the driest year to date in Mariposa County for the 128 years for which there are records.

While it is too soon to say the exact cause of the Oak Fire incident, there has been research published previously linking California wildfires to climate change. A 2019 study showed that between 1972–2018 the burned area increased five times and an eightfold increase of the number of summer forest fire events.

“Warming effects were also apparent in the fall by enhancing the odds that fuels are dry when strong fall wind events occur. The ability of dry fuels to promote large fires is nonlinear, which has allowed warming to become increasingly impactful,” the study said. “Human-caused warming has already significantly enhanced wildfire activity in California, particularly in the forests of the Sierra Nevada and North Coast, and will likely continue to do so in the coming decades.”

The California wildfires come the week after portions of Europe burned in due to wildfires there, too.

Also, while wildfires rage, U.S. lawmakers have so far not been able to get climate legislation through Congress, largely stalled by Senator Joe Manchin from West Virginia.

Even as the Oak Fire wildfire continues to burn, firefighters are starting to make some progress. “Firefighters made good headway today,” the California Department of Forestry and Fire Protection’s situation summary reads.

A home burns on Saturday as part of the Oak Fire

A home burns as the Oak Fire moves through the area on July 23, 2022 near Mariposa, California.

Firefighters trying to contain the Oak Fire near Jerseydale Road

Firefighters work to contain a fire in order to save a structure located near Jerseydale Road during the Oak Fire in Mariposa County, California, US, on Sunday, July 24, 2022.

A firefighting aircraft drops flame retardant on the Oak Fire

A bird flies as a firefighting aircraft drops flame retardant on a hillside to control the Oak Fire while burning near Darrah in Mariposa County, California, U.S., July 24, 2022.

A home burns on Saturday as part of the Oak Fire

A home burn as the Oak Fire burns through the area on July 23, 2022 near Mariposa, California.

A firefighting air tanker flies over a forest decimated by the Oak Fire near Mariposa, California, on July 24, 2022.

A firefighting helicopter passes the setting sun while fighting the Oak Fire near Mariposa, California, on July 24, 2022.

A firefighter battling the Oak Creek fire on Sunday.

A firefighter lights a backfire while fighting the Oak Fire on near Mariposa, California, on July 24, 2022.

Fire burns near a Smokey the Bear fire warning sign as the Oak Fire burns through the area on July 24, 2022 near Jerseydale, California.

An aerial view from the International Space Station of the Oak Fire near Yosemite National Park, taken from above Yosemite Valley, California, U.S., July 22, 2022, in this screen grab taken from a handout video.

Aerial view of the fire on Friday

An aerial view from an aircraft of the Oak Fire near Yosemite National Park, taken from above Yosemite Valley, California, U.S., July 22, 2022.