HomeBusinessHere's what China's Alibaba and Kuaishou say about the economy
Business 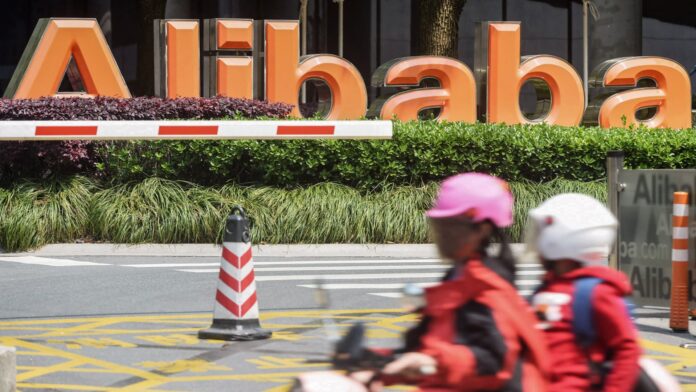 Across five major e-commerce platforms’ GMV, Alibaba’s market share fell by 6% in the first quarter versus the fourth, according to Bernstein analysis.

BEIJING — Alibaba was once the poster child for investing in modern China. Now the e-commerce market that fueled its growth is slowing, while new players eat away at Alibaba’s market share.

That’s reflected in the stocks’ performance since an apparent bottom in sentiment on major Chinese internet names in mid-March.

Pinduoduo shares have more than doubled since then, while Meituan shares have climbed 80%, and JD shares are up more than 50% in Hong Kong. Kuaishou is up by nearly 47%.

But except for Kuaishou and Pinduoduo, the stocks are still down for the year so far.

“Our top picks in the sector remain JD, Meituan, Pinduoduo, and Kuaishou,” Bernstein analyst Robin Zhu and a team said in a report this week. “Interest in Alibaba has persisted, chiefly from overseas investors, while feedback on Tencent has become very negative.”

Over the weekend, the 6.18 shopping festival spearheaded by JD.com saw total transaction volume rise by 10.3% to 379.3 billion yuan ($56.61 billion). That is a new high in value — but the slowest growth on record, according to Reuters.

Merchants who spoke with Nomura said Covid lockdowns disrupted apparel production, while consumer demand was generally low, according to a Sunday report. High-end product sales fared better than mass-market ones, the report said, citing a merchant.

Alibaba, whose main shopping festival is in November, only said it saw growth in gross merchandise value from last year, without disclosing figures. GMV measures total sales value over a certain period of time.

“Online retail growth is likely to be slower this year than in 2020 and 2021, and its gain in penetration rate may be weaker than the average of 2.6 [percentage points] during 2015-2021,” Fitch said in a report last week.

“This is due to a larger base, deeper integration of online and offline channels … and weaker consumer confidence on concerns of a slowing economy and rising unemployment,” the firm said. Fitch expects online sales of food and household goods to perform better than that of apparel.

In May, online retail sales of goods surged by more than 14% from a year ago, but overall retail sales fell by 6.7% during that time.

In that online shopping market, new companies have emerged as rivals to Alibaba. These include short-video and livestreaming platforms Kuaishou and Douyin, the Chinese version of TikTok also owned by ByteDance.

Across five major e-commerce platforms’ GMV, Alibaba’s market share fell by 6% in the first quarter versus the fourth, according to Bernstein analysis published early this month.

JD, Pinduoduo, Douyin and Kuaishou all grew market share during that time, the report said. Douyin’s GMV share increased the most, by 38%, although its combined market share with Kuaishou is only about 12% among the five companies.

In a sign of how Kuaishou has emerged as its own e-commerce player, the app in March cut off links to other online shopping sites.

“Their recent decision to cut off external links to [Alibaba’s] Taobao and JD shows that times have changed,” Ashley Dudarenok, founder of China marketing consultancy ChoZan, said at the time of the news. “Taobao is no longer the only main battlefield for e-commerce.”

In the quarter ended March 31, Kuaishou reported GMV on its platform of 175.1 billion yuan, a surge of nearly 48% from a year ago.

Last month, ByteDance’s Douyin claimed its e-commerce GMV more than tripled in the last year, without specifying when that year ended. Douyin banned links to external e-commerce platforms in 2020.

While Douyin dwarfs Kuaishou by number of users, what’s different for investors wanting to play the short-video e-commerce trend is that Kuaishou is publicly listed.

Even in JPMorgan’s prior call in March to downgrade 28 “uninvestable” Chinese internet stocks, the analysts kept their only “overweight” on Kuaishou based on “management’s sharper focus on margin improvement, higher gross margin, larger user base and less competition risk.”

Users like cosmetics livestreamer Zhao Mengche often describe Kuaishou as having a “community,” in which he said the app is trying to integrate more brands and mimic a village market square — online. Zhao has more than 20 million followers on Kuaishou.

During this year’s 6.18 shopping festival, fashion-focused social media app Xiaohongshu claimed more merchants made their products available directly on the app, and said users could buy imported JD.com products through Xiaohongshu as well.

Looking ahead, companies were more inclined in the first quarter to spend on advertising closest to where consumers might make a purchase, rather than just building awareness, according to Bernstein. They estimated growth of 65.8% in Kuaishou e-commerce ads in the first quarter from a year ago, with Pinduoduo, JD and Meituan also seeing double-digit growth.

However, revenue across the top 25 advertising platforms tracked by Bernstein grew by 7.4% year-on-year in the first quarter, slower than 10.8% growth in the prior quarter.

And for ByteDance — the largest advertising platform in China in the first quarter alongside Alibaba — Bernstein estimated domestic ads grew by only 15% in the first three months of the year, despite livestreaming sales GMV likely nearly tripling, the analysts said.

They expect ByteDance’s domestic ads business to slow to the single digits, or even contract, in the second quarter.