HomeUSAHospitalizations have doubled since May as omicron BA.5 sweeps U.S.
USA 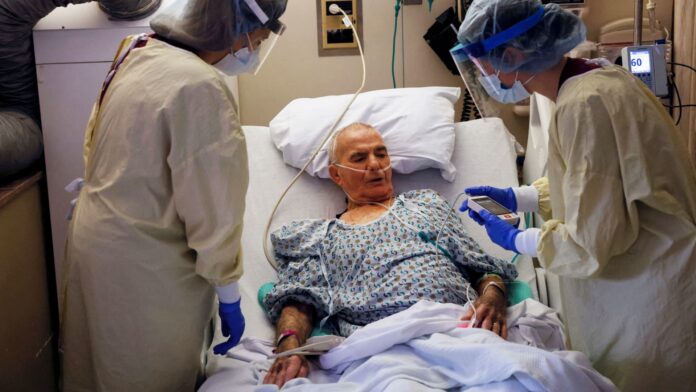 People hospitalized with Covid-19 have doubled since early May as the even more transmissible omicron BA.5 subvariant has caused another wave of infection across the country, U.S. health officials said Tuesday.

But deaths from Covid still remain relatively low given the number of infections right now, the officials said. Dr. Ashish Jha, who coordinates the Biden administration’s Covid response, said deaths from the virus are not increasing at the same rate they once did due to the availability of vaccines and the antiviral treatment Paxlovid.

“Even in the face of BA.5, the tools we have continue to work. We are at a point in the pandemic where most Covid-19 deaths are preventable,” Jha told reporters during a pandemic update Tuesday. But he said the number of deaths still remains unacceptably high given the fact that the U.S. has vaccines and treatments to prevent the worst outcomes.

More than 16,600 total patients were hospitalized with Covid across the U.S. as of Saturday, according to data from the Centers for Disease Control and Prevention. Currently, an average of more than 5,000 people have been admitted to the hospital with Covid every day compared with an average of more than 2,000 daily admissions for the week ended May 1, according to the CDC.

The U.S. is currently reporting an average of nearly 104,000 Covid infections per day as of Sunday which is almost double the number of reported cases at the start of May, according to the data. White House chief medical advisor Dr. Anthony Fauci said the reported infections are clearly an undercount because many people are using at-home tests that aren’t reflected in the data. Fauci said the real number of cases might be anywhere between 300,000 and 500,000 new infections a day.

Deaths from the virus have remained relatively low at about 280 fatalities a day on average as of Sunday, according to CDC data. At the height of the winter omicron wave, an average of nearly 2,700 people were dying from Covid a day.

“The ratio of hospitalization, ICU and death to cases is much lower now than it was many months ago,” Fauci said.

The omicron BA.4 and BA.5 subvariants now make up 80% of Covid infections across the U.S., with BA.5 emerging as the dominant version of the virus. Fauci said BA.5 is more transmissible than past variants and it substantially evades the protective antibodies triggered by vaccines, but the shots are still generally protecting against severe disease. In other words, people who are fully vaccinated might get infected and have mild to moderate symptoms, but they are unlikely to be hospitalized and even more unlikely to die from Covid.

Fauci said BA.5 doesn’t appear to carry a great risk of severe disease compared with other omicron subvariants. But as cases increase due to its greater transmissibility, some people will end up in the hospital or ICU, he said.

People who caught the previous omicron variants, BA.1 and BA.2, are likely still at risk of infection from BA.4 and BA.5, according Dr. Rochelle Walensky, director of the CDC. Walensky said the current omicron wave will likely play out differently around the country depending on how much immunity communities have from vaccination, boosting and prior infection.

Jha encouraged all Americans to stay up to date on their shots and said people ages 50 and older should get their fourth dose. He also said people who test positive should consult with their health-care provider about receiving Paxlovid, Pfizer’s oral antiviral treatment. People should also consider getting tested for Covid before attending any large indoor events or visiting with individuals who are at high risk like people with weak immune systems.

The Biden administration is also discussing whether the broader population should be eligible for a second booster shot, though that decision ultimately rests with the Food and Drug Administration and the CDC, Jha said. The FDA told the vaccine makers last month to change the formula in their shots to target the BA.4 and BA.5 subvariants, as well as the original virus strain that first emerged in Wuhan, China, ahead of a possible fall booster campaign.

U.S. health officials are worried the country faces another major surge in infection this fall as immunity from the vaccines wanes and people spend more time indoors to escape the colder weather. Jha said the U.S. has placed one order with Pfizer for 105 million doses of the updated vaccine. The U.S. is also in discussions with other companies for additional shots, he said.

“Obviously, that will not be enough for all Americans,” said Jha, who has repeatedly warned that the U.S. might have to ration vaccines to those who face the highest risk from the virus this fall if Congress does not approve more funding for the pandemic response.

Negotiations over a Covid funding package have been stalled for months over Republican opposition to the White House’s original $22.5 billion price tag. The Senate struck a bipartisan deal for $10 billion to buy vaccines and treatments, but that package has stalled as GOP lawmakers and some Democrats demand the Biden administration reimplement a pandemic-era public health law that deported asylum seekers and other migrants attempting to cross the U.S.-Mexico border.