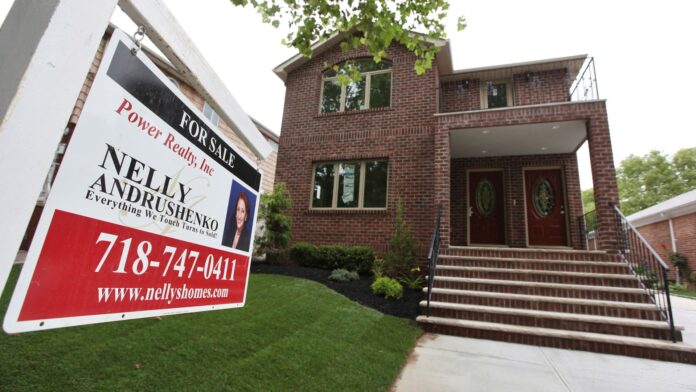 A “For Sale” sign is seen outside a home in New York.

A historic housing shortage brought on by the one-two punch of slow construction and strong pandemic-induced demand is finally starting to ease.

Active listings for homes jumped 19% in June, the fastest annual pace since Realtor.com began tracking the metric five years ago. And the number of new listings during the month finally surpassed typical pre-Covid levels, up 4.5% from a year ago. Overall inventory, however, is still about half pre-Covid levels.

Some markets that saw the biggest surges in demand during the pandemic are now among those seeing the biggest gains in supply: Austin inventory was up close to 145% from a year ago, Phoenix was up 113% and Raleigh up nearly 112%. Other markets are still seeing supplies fall: Miami is down 16%, Chicago is down 13% and Virginia Beach is down 14%.

“We expect to see additional inventory growth in July, building on accelerated improvements seen throughout June,” said Danielle Hale, chief economist at Realtor.com, adding that the supply gains increased as the month progressed.

And Hale said even more homeowners could decide to sell, adding new supply as buyers grapple with higher costs and difficulty finding homes that fit their budgets.

Still, the expanding supply is not easing sky-high home prices yet. The median listing price in June hit another record high of $450,000 according to Realtor.com. Annual gains are moderating slightly, but still up almost 17%. That’s partly because the share of larger, more expensive homes is rising.

The costs of owning the median-priced home in the second quarter required 31.5% of the average U.S. wage, according to a new report by ATTOM, a property data provider. That’s the highest percentage since 2007 and up from 24% the year before, marking the biggest jump in more than two decades. Lenders generally see a 28% debt-to-income ratio as the ceiling for approving a mortgage. It’s why some potential home buyers today are no longer qualifying for a mortgage.

As a result, the affordability of buying a home in the second quarter dropped in 97% of the nation, according to ATTOM. That’s up from 69% in the same quarter a year ago, and the highest reading since just before the housing crash in the Great Recession.

ATTOM calculates the affordability for average wage earners by determining the amount of income needed for major home ownership expenses on a median-priced home, assuming a loan of 80% of the purchase price and a 28% maximum debt-to-income ratio.

“With interest rates almost doubling, homebuyers are faced with monthly mortgage payments that are between 40% and 50% higher than they were a year ago – payments that many prospective buyers simply can’t afford,” said Rick Sharga, executive vice president of market intelligence at ATTOM.

A few factors could thwart the continued growth in inventory levels, including a pullback from potential sellers who might decide to wait for the market to strengthen again. Still, Hale of Realtor.com noted that new and pending home sales were up this month, so some people might feel now is time is right to buy.