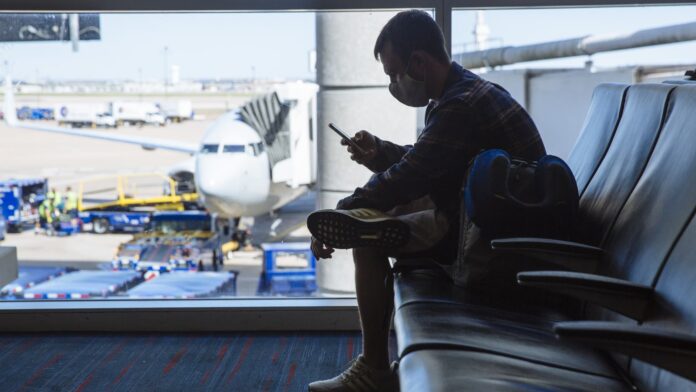 A traveler wearing a protective mask views a smartphone while waiting for a flight at Dallas/Fort Worth International Airport (DFW) in Dallas, Texas.

WARRENTON, Va. – During a morning meeting in early May, staff at the federal air traffic command center rattle off a few of the day’s obstacles: storms near the Florida coast and in Texas, a military aircraft exercise, and a report of a bird strike at Newark Liberty International Airport.

The center, about an hour’s drive from Washington, D.C., is responsible for coordinating the complex web of more than 40,000 flights a day over the U.S. Shortly after 7 a.m. ET, there were already 3,500 flights in the air. During peak travel periods, that figure can climb to more than 5,000 flights at once.

Now as air travel rebounds to near pre-Covid pandemic levels even as airlines remain understaffed, the agency and carriers are trying to control the rising rate of delays and cancellations that can ruin vacations and cost airlines tens of millions of dollars in lost revenue. The problems are coming during the high-demand spring and summer travel season, which also coincides with some of the most disruptive weather for airlines — thunderstorms.

From the start of the year through June 13, airlines canceled 3% of the roughly 4 million commercial U.S. flights for that period, according to flight-tracking site FlightAware. Another 20% were delayed, with passengers waiting an average of 48 minutes.

Over the same period in 2019 before the pandemic, 2% of flights were canceled and 17% delayed, with a similar average wait time, according to FlightAware.

Typically, the FAA manages the flow of air traffic in part by holding inbound traffic at originating airports or slowing arrivals.

Flight cancellations and delays last year and in 2022 have raised concerns among some lawmakers.

With no quick fix in sight, the FAA and airlines are scrambling to find other solutions. One option has been allowing airlines to fly at lower altitudes to avoid weather challenges, even though the approach burns more fuel.

Airlines are coming up with their own solutions, too. In April, American Airlines launched a program called HEAT that analyzes traffic and potential disruptions, which lets it identify which flights to delay as early as possible to avoid a cascade of cancellations.

“We can start hours in advance, in some cases five, six hours in advance of what we believe the storm is going to be,” said David Seymour, American Airlines’ chief operating officer.

“We’ve got to be able to be very nimble and adaptive to the scenario as it plays out,” he added.

The pandemic slowed air traffic controller training, but the FAA hired more than 500 new controllers last year to bring its workforce to about 14,000. The agency wants to hire more than 4,800 more over the next five years. The FAA said it is in the middle of a hiring a campaign called “Be ATC” and said it will work with social media influencers and hold Instagram Live events about the job.

The job isn’t for everyone. Applicants can be no older than 30 and must retire when they turn 56. Pilots in the U.S. are forced to retire at 65 and airlines are currently facing a wave of retirements, some of which were sped up in the pandemic when carriers urged them to leave early to cut their costs. Lawmakers this year have been considering a bill that would raise the pilot retirement age at least two years.

Back at the command center, the cavernous room where air traffic specialists, airline and private aviation industry members, and meteorologists work features large screens showing air traffic and weather high along the main wall. It shows a bird’s-eye view of the country’s air traffic, which has been rebounding so fast that fares are outpacing 2019 levels.

“The problem is Texas right now,” John Lucia, national traffic management officer at the center, during one of the morning meetings. He was pointing to a cluster of thunderstorms that were threatening to delay dozens of flights at east Texas airports.

He noted the weather was set to hit the Dallas-Forth Worth area at around 10 a.m.

“So it gives us a couple hours to worry about it,” said Lucia, a more than three-decade FAA veteran.

Last year, Dallas/Fort Worth International Airport became the world’s second busiest thanks to booming U.S. travel and a dearth of international trips. The airport is the home hub of American Airlines. Nearby is also Dallas Love Field, the home base of Southwest Airlines.

Inclement weather causes 70% of U.S. flight delays in an average year, according to the FAA. But there are other reasons for delays, too.

“We’ve seen people streaking on the runway,” said Price, the center’s air traffic manager. “We’ve had wildlife on the runways. You have to be ready for everything.”

Some of the most congested airspace has been in Florida. The state has long been a top tourist destination, but became even more of a hot spot during the pandemic for travelers seeking outdoor getaways. Some airports like Tampa and Miami are seeing higher numbers of airline capacity compared with before Covid-19 hit.

At the same time, the state is prone to thunderstorms that can back up air traffic for hours. Airlines and the FAA have sparred over who’s at fault, with carriers sometimes blaming air traffic control, including ATC staffing shortfalls, for delays which cost them by the minute.

One solution from airlines has been to pare down their flying despite surging demand. JetBlue Airways, Spirit Airlines, Alaska Airlines and most recently, Delta Air Lines, have trimmed their schedules back as they grapple with staffing shortages and routine challenges like weather, to give themselves more backup for when things go wrong.

In May, the FAA organized a two-day meeting with airlines in Florida about some of the recent delays. Afterward, the FAA said it would ramp up staffing at the Jacksonville Air Route Traffic Control Center, which oversees in-air traffic in five states — Alabama, Georgia, Florida, and North and South Carolina — and tends to deal with challenges from bad weather, space launches and military training exercises.

The FAA stopped short of capping flights serving Florida but had said it would help airlines come up with alternative routes and altitudes.

For example, the agency is also routing more traffic over the Gulf of Mexico, Price said.

Spring and summer thunderstorms are among the most difficult challenges because they can be so unpredictable.

American’s Seymour said the airline can still improve, “We’re continuing to look to find better ways to get to manage these situations.”